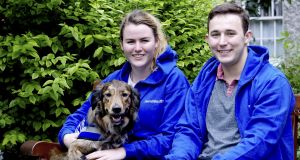 “I called a helpline. It wasn’t with the intention for them to save me, because I really didn’t think they could. I just wanted to have the call logged on my phone so my parents would see that I had made an effort to dial it.”

Aimée-Louise Carton is chief executive, and co-founder alongside Will Ben Sims, of KeepAppy, a personal mental wellness app that was born out of her own struggles with mental illness. As a result of PTSD brought on by sexual assault, she stood on the Dundrum Luas bridge and contemplated taking her own life.

“I must have mentioned my dog, Aura, because suddenly they kept asking me questions about her and made me realise that I love my dog so much and didn’t trust anyone to look after her. That was what caused me to walk away from the bridge and get the help I needed. I always say that my dog saved my life and I really do believe it.”

Over the following months, as Carton was getting professional care and slowly improving, her impatience with the long journey to recovery had her wishing she could hurry things up: “I was so grateful for the care I was receiving but I’m an impatient person so I started looking on my phone for wellness apps. Other than the meditation apps, most of them were ugly and really hard to use.

“They were built by clinical psychologists or organisations with people who have the best of intentions but just didn’t seem to get the user perspective or the importance of having a nice experience when using the app. So I would use them once or twice and then never go back.”

The fact that she is the ninth generation of one of Ireland’s oldest family businesses didn’t hurt: “I always joke and say I grew up around a boardroom table as opposed to a Sunday lunch table. Even though I didn’t necessarily want to go into business, I’ve grown up surrounded by it.”

She says this helped her see a gap in the market where people were being sold mindfulness as a silver bullet for all mental health issues when these apps don’t necessarily work for everyone. After conducting some research, she found that only 13 per cent of people actually use meditation apps on a regular basis.

“For those 13 per cent it’s great and works well for them. But for the 87 per cent of us it doesn’t work for, there’s no solution. It’s kind of like going into a gym and being told that you can only go on the treadmill – that it is the only thing that you can do to remain physically healthy – but that’s not how it works. Some people prefer weights, some people prefer swimming.

“It’s the same with our mental well-being; there are tools out there you only learn about when you’ve reached crisis point, like me getting up on that bridge. I only learned about the tools after the fact when we should all be engaging with them every day – but we just don’t know about them.”

KeepAppy is designed as a mental wellness gym of sorts: there are several different elements to interact with but it is up to the user to choose what they feel like using and when. There are practical elements – the medical pill reminder and period tracker – as well as therapeutic tools (mood tracking, journaling, meditation and a gratitude diary) and motivational tools (goal tracking and gamification).

Carton says the app is about using technology to empower the user rather than replace traditional methods: “I hate when people ask if the app is meant to replace therapy because, if you have a mental illness like PTSD, ADHD, etc, you need to go to your therapist, you need to take associated medications because it is a real illness just like physical illness.

“KeepAppy is a preventative well-being toolkit and it is designed for everyone to use. We are also in process of getting clinical trial approval because, although I use KeepAppy myself, I am also treated for epilepsy and borderline personality disorder, so I use it in conjunction with my psychologist, psychiatrist and neurologist.”

KeepAppy has a beta launch date of August 28th. It currently has a KickStarter campaign to raise funds for a future gamification feature that personifies the user’s mental health progress as an avatar called a Keepie, which Carton describes as being like a Tamagotchi or Nintendog. Just like her dedication to her dog Aura, she says: “You must love yourself to be able to look after them.”

The KeepAppy business model straddles for-profit and social enterprise: using the ‘one for one’ model: every time someone buys a subscription, another is given away for free. This is distributed through the company’s Global Crisis Care Network: the subscriptions are donated to partner helplines around the world.

As someone operating in this space, she says it can be tricky.

By operating as a start-up they don’t fall into the CLG (charity or non-profit status) bracket that receives government social enterprise funding, but by identifying as a social enterprise, they aren’t considered ‘for profit’ enough to get the usual start-up grants.

And getting investors on board has been a challenging experience, says Carton.

“We’re looking for investors and although we haven’t exactly been black-balled, I have been called ‘suicide girl’ by one of the big investors here in Ireland. They said that they never wanted to work with me because if I committed suicide, they didn’t want that on their conscience.”

However, KeepAppy is part of the global Tech For Good movement. It has found this community to be invaluable in terms of advice, support and finding start-ups in similar situations. “The Tech For Good scene in Dublin is amazing. It is the most supportive, most engaging community there is. We’re all so determined to make a social impact,” says Carton.

Tech For Good is a decentralised, global network that emerged in the UK about a decade ago, born of hack weekends when techies and non-techies came together to work on apps, software, hardware – anything that could help tackle social issues ranging from reducing littering to helping the homeless.

It spread around the world and reached the ears of Ellen Ward, IT project manager for Concern Ireland, and Máirín Murray of e-learning design company Digital Doddle. In March 2017 they set up Tech For Good Dublin.

Ward is keen to keep an emphasis on the grassroots aspect of the collective and has let the community help define their manifesto. This states: “We believe in taking a philosophical and ethical view and considering both positive and negative impacts of technology on people, communities and planet. When it is not possible to consider all people at once, then the most vulnerable, disenfranchised or excluded people should be considered as a priority.”

In the Tech For Good movement no money changes hands: businesses donate venues and refreshments, all work is carried out on a voluntary basis, and no one is paid to speak.

Big tech companies, such as Microsoft and Facebook, run their own Tech For Good themed events but Ward says: “It’s not like what we’re doing; it’s usually about giving discounts on licensing or offering a bit of free consultancy. It can be annoying sometimes when big companies get involved and they’re essentially just selling something.”

Tech For Good Dublin events are usually themed and the latest one demonstrates that not only Carton thinks mental health and well-being is an important social impact issue.

Focusing on the intersection of technology and neurodiversity, Ward said they got more speaker offers than usual and ended up running out of time.

Hannah Bryson, a computer science student and disability rights officer at UCD, gave a talk about her own experience with dyslexia, dyspraxia, ADHD and autism and how she designs the teaching experience to help neurodiverse children at CoderDojo events.

Gearóid Kearney, chief executive of myAccessHub, talked about his startup that creates animations and VR experiences to educate people about creating an autism-friendly workplace.

“We want to do so much more,” says Ward. “It’s really about ordinary people having a little bit more use and control over technology and not being passive consumers. It’s also about people working for tech companies who have all these skills and want to use them for something good.

“Everyone who gets involved in Tech For Good, they want to do something that aligns with their own values and they want to try and make a difference.”