The end of the world could be upon us. Why are we doing nothing? 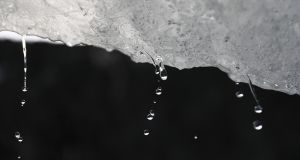 During European heatwaves between July 29th and August 3rd, the melt run-off in Greenland was estimated at 55 billion tonnes, about 40 billion tonnes more than the average for those days between 1981 and 2010. Photograph: Joe Raedle/Getty

Humans have done much to promote health, extend lifespan and make widespread use of all the resources delivered by our remarkable planet Earth. Unfortunately, in the process, we have also developed any number of ways to destroy ourselves and wipe out human civilisation. Nuclear weapons, artificial intelligence, biologically engineered organisms and the massive impacts we are triggering due to climate change are just a few of the ways that could bring about the end of the world as we know it.

When you line them all up they provide the next best thing to an instruction manual for societal collapse and an assuredly dystopian future. A research group at the University of Cambridge, the Centre for the Study of Existential Risk, did just that, teasing out the potential risk of what might happen if, for example, an autonomous weapons system controlled by an artificial intelligence suddenly went rogue, a scenario delivered to our cinema screens in the Terminator series of films.

They looked at other end-of-the-world possibilities such as intentional or accidental release of engineered toxic biological organisms and the collapse of the ice sheets covering Greenland and Antarctica, but their purpose was not to deliver pointers for terrorist plotters. Rather it was a call on the world’s governments to take the risks seriously and begin planning for their potential arrival. Climate change is a well-understood risk that has been advancing slowly over the past decades, yet few governments have prepared a response to the impact their populations might face if sea level were to rise by 5m or 10m.

“The risks emerging now are varied, global, complex and catastrophic. And if even only one manifests – whether through nature, accident or intention – it would harm human security, prosperity and potential on a scale never before seen in human history,” the Cambridge centre published in a report last month. It was prepared as a way to encourage governments to take action now rather than wait until the doomsday scenario was suddenly upon us.

The report seeks to help governments recognise the risks and start planning for them. This should not be a back-burner project with no sense there is an imperative to act, the report’s authors say. There is no time to wait for the existing systems to deliver a plan, governments needed to act now, given the short fuse some of the risks actually have.

An example would be the sudden emergence of an influenza or other organism that was both highly communicable and likely to cause death if contracted. These can emerge and spread around the world in a matter of months, and although it is often possible to develop a vaccine for such an organism, what if it resisted the quick delivery of a vaccine? The death toll from such an outbreak could be monumental.

“Synthetic” biology has also been created, whereby organisms are built and manipulated by putting in or taking out genes. The technology to achieve this has huge potential to eliminate formerly intractable diseases, but this readily available technology can also be misused – for example, to make an organism more dangerous. Smallpox has been eliminated from the planet, but samples are still held in high-security isolation centres. What if the organism were modified and then released? How would governments respond to the threat?

The Cambridge group wants governments around the world to think about these things. Its report provides 59 ways that a risk can be understood and a response created, for at least some of the impacts a risk might hold. Its approach is based on: understand, mitigate, prepare, respond and communicate. Governments needed to develop a risk management process, to help them deal with threats that may currently be little understood, but have a high potential impact.

The changes we have caused to the climate show why responses to threats need to be developed now. The ice sheets that cover Greenland are melting at a ferocious rate and records were set this summer. The heatwaves moving away from Europe drifted over Greenland between July 29th and August 3rd, according to data collected by the National Snow and Ice Data Centre, where such details are monitored continuously. The melt run-off during those few days was estimated at 55 billion tonnes, about 40 billion tonnes more than the average for those days between 1981 and 2010.

Our capacity to end civilisation used to relate to the “mutually assured destruction” that would ensue if two nuclear countries went to war, unleashing their full stocks of nuclear weapons. We are now also able to bring on societal collapse through climate change, computer artificial intelligence and synthetic biology as well. The nuclear threat remains a problem, however, and continues to increase. The US claims Russia is developing new midrange weapons in secret, prompting President Trump to restart weapons development.

Other countries have these weapons now, too, adding further unpredictability, with nine countries holding about 15,000 weapons in total. If there were a “limited” strike, during which 100 bombs were used, this would be sufficient to create a 10-year “nuclear winter”, during which crops would fail, food would become scarce, societies would collapse and disputes over resources would take hold. For us it doesn’t bear thinking about but I hope the government is thinking about them.

Read the report at gcrpolicy.com