Overcast’s partnership with Avid part of plan to go global 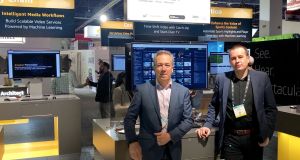 The Republic of Ireland is a hotbed for multimedia technology and, with so many groundbreaking companies working in the space, has the potential to be a leading global hub.

That is according to Philippe Brodeur, chief executive and founder of Overcast, an Irish video collaboration company that has recently seen its technology directly incorporated into Avid Technology’s Cloud UX platform.

Avid is arguably one of the world’s leader multimedia companies with revenues of $413.3 million (€365.6 million) last year, and two Oscars, a Grammy and 16 Emmys to its name. All the major Hollywood film studios use its creative tools, as do nine of the top 10 international news networks. In addition, up to 70 per cent of commercial music currently produced is estimated to have been created using Avid’s Pro Tools platform.

The partnership with Avid is one of a number of partnerships that Overcast has recently agreed as it looks to scale internationally. The Dublin-headquartered company has also just signed a new agreement with Amazon Web Services. The latter led to Overcast appearing with AWS last week at the National Association of Broadcasters annual event (NAB 2019) in Las Vegas as one of 12 key global tech partners.

“Our strategy has always been to bring on enterprise clients and the fact that we are working with two of the biggest companies in the market – Avid and Amazon – is testament to the quality of our product,” Brodeur told The Irish Times.

He praised what he described as a collaborative network of individuals and companies in the Republic for helping Overcast to put itself on the map.

“One of the things most people don’t realise is that here in Ireland we have an incredible base of video technologists. It is a real hotbed here and I think that in five to 10 years we could have a real global centre for video technology here, which is something that really excites me,” he said.

Among the companies namechecked by Brodeur is Artomatix, a company that has developed artificial intelligence (AI) technology to help automate 3D art creation for game design. Others include video commerce start-up Axonista and media tech group Tvadsync.

He also noted the presence here of Anil Kokaram, a professor at Trinity College Dublin and adviser to Overcast, who sold his start-up to Green Parrot Pictures to YouTube in 2010 and then served as its head of technology for five years before returning to the Republic.

Brodeur, who comes from Canada, also has an impressive track record in the video tech space. Having worked originally as a senior producer for the BBC, he moved to Dublin in the late 1990s where he helped to launch TV3. Brodeur then went on to launch broadcast streaming website AerTV and a platform for and a video-on-demand platform for David McCourt, the businessman leading the last consortium bidding for the National Broadband Plan.

Previously cited by Google as one of 40 start-ups that could change the world, Overcast was founded by Brodeur and Zsolt Lorincz in 2016. It is positioning itself as a “Google Docs for professional videos”.

The company’s technology integrates the storing, sharing and distribution of video content with the goal of making it as easy to manage large video files as it would be to manage a document. It also uses machine learning and artificial intelligence to automate repetitive tasks in the video production supply chain.

“We automate production processes to make it faster for professionals to get content to market,” is how he describes the work of Overcast, noting that demand for video content has never been higher while the number of video formats used has ballooned.

Brodeur says that while YouTube may have largely solved issues around consumer video distribution, such problems have not yet been resolved at the enterprise level, a situation his company is looking to rectify.

Vodafone Ireland, which has been using Overcast’s asset management platform for some time, recently commissioned the company to stream VoD content directly to 35,000 household TVs.

The company announced big plans to take on up to 70 people and to raise €5 million a few years ago. However it currently employs a handful of people and has raised just €900,000 to date from backers who include Google’s head of start-ups Paddy Flynn, Citrix vice-president Martin Kelly and former IBM senior executive Hugh O’Byrne.

“Our future recruitment and series-A round funding targets remain the same, but core to those plans are bringing on board major partners such as Avid and Amazon, as well as syncing with their developments,” said Brodeur.