Fashionable exit: The separation of technology and style 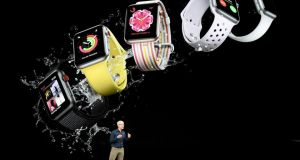 A sudden, striking influx of glamorous non-techies at a tech hub in California. Grumbles about NDAs. Excited, surreptitious glances. Gossip about disruption. A drumroll for a hitherto hush-hush, industry-upsetting announcement.

This is not a description of what is happened last month at the Apple event in Cupertino, as the company unveiled its new video service and television shows (among other things).

It is a description of what happened on September 9th, 2014, at the Apple event in Cupertino, where the Apple Watch was unveiled.

For those of us who remember that day, the run-up to this week has provided an eerie sense of deja vu.

Not to mention a question: What’s the deal with wearables and fashion?

Five years on from the watch’s much-ballyhooed introduction, is the relationship over? Has technology found a new object for its affections? For a brief, shining moment, there was such an intense attraction.

The trend wheel turns so fast these days that it is easy to forget, but take a moment, please, to remember when. Because it is possible that there is a lesson for us all buried in the end of the affair (apologies to Graham Greene).

The cool of California was going to rub off on the hidebound fashion world, and the glamour of fashion was going to fill consumers with desire for products

“There is this endless hunger in fashion for newness and what’s the next thing, and Apple and Silicon Valley really promises that,” said Mimma Viglezio, editor of the digital platform ShowStudio. “So they” – we! – “just embraced it.”

In advance of the watch’s introduction, Apple – which, after all, had been built on some of the principles dear to luxury, including the allure of tactile design, and planned obsolescence – began seducing glossy executives right and left to come work for the company.

Most notably there was Paul Deneve, chief executive of Yves Saint Laurent; Patrick Pruniaux, of Tag Heuer; and Angela Ahrendts, the chief executive credited with using technology to transform Burberry, who arrived at Apple to run its retail and e-tail operations with a gilded halo still fresh on her head.

Front-row denizens like Alexandra Shulman, editor of British Vogue, and Lauren Indvik, editor of Fashionista, flew out to Cupertino in the middle of New York Fashion Week, suggesting that when it came to shows, the one in California was the one that mattered.

During Paris Fashion Week, Apple had an unveiling at the super-boutique Colette and Karl Lagerfeld came.

Later there was a dinner at Azzedine Alaea’s, so designers like Olivier Rousteing (of Balmain) and models like Cara Delevingne could ogle the accessory.

The watch made its magazine debut on the cover of China Vogue.

Apple took out a 12-page ad in American Vogue. One year after the first unveil, also during fashion week, Apple announced a partnership with Hermes, and the following May the company underwrote the Met Gala for the Manus x Machina show, itself an ode to the cosiness of fashion and technology (which was the unofficial dress code of the party).

Tim Cook, chief executive of Apple, showed up; Jony Ive, Apple’s chief design officer, was a co-host, along with Anna Wintour, artistic director of Conde Nast and editor of Vogue.

As symbolism went, the picture said it all.

In the meantime, a few brands are dallying with cool stuff on the side

Not long afterward, Ralph Lauren introduced the connected Ricky bag with a light and a charging port (which followed its connected tennis shirt that monitored heat rate).

“It’s a game changer for us in luxury,” David Lauren, the company’s executive vice president for advertising, marketing and corporate communications, said at the time.

That moment in 2012 when Google Glass strutted down the runway at a Diane von Furstenberg show and everyone cringed – even DVF could not rescue that gadget from its own nerdiness – was treated as simply an awkward early harbinger of better things to come.

This was the future!

The cool of California was going to rub off on the hidebound fashion world, and the glamour of fashion was going to fill consumers with desire for products. Instead of competing for the same wallet share, they would both benefit.

But then Deneve left Apple.

And next month, Ahrendts departs.

Intel “exited the end-product wearables area in 2017,” according to a company spokeswoman, and has pivoted to data analysis used to inform retailers and brands, among others.

Will.i.am refocused on “artificial intelligence and voice-controlled computing, for B2B and B2C hardware” his representative said.

All the talk about wearables and fashion has gone very, very quiet.

“The Venn overlap is not as great as anyone thought,” said Scott Galloway, a professor of marketing at the New York University Stern School of Business and founder of the digital think tank L2.

This does not mean that wearables themselves are over (although it would be good if someone could think of a different word for the category, since theoretically it could apply to anything you put on your body).

By all accounts, the smartwatch industry, which accounts for 44 per cent of the “wearable devices” market, according to the research group International Data Corp, is doing just fine.

IDC predicts that watches will be among the main drivers of a 15.3 per cent growth in the market this year.

A new report from the NPD group said that in 2018 sales of smartwatches in the United States increased 54 per cent.

In Apple’s Q1 2019 earnings call in January, Cook said its wearables category was up 50 per cent (that primarily means watches and AirPods).

A spokesman for Hermes said its Apple watch was one of its most popular models.

Louis Vuitton’s smartwatch accounts for half its watch business.

But while once upon a time there were rumours about other designers joining the gang, and third parties like Coach and Kate Spade have made bands for the Apple watch, the talk these days is all about the watch being a platform for health and fitness – which is also why the fitness brands (Nike especially) are still gung-ho.

That does not mean fashion itself is not interested in technology. There is a lot of excitement among executives I speak to about augmented reality as a shopping tool. As far as material science and production, technology is hugely promising, especially as the industry looks more and more to sustainability.

“What’s happening is it has spread into the back end of production nanotechnology and fabric,” said Amanda Parkes, chief innovation officer of Future Tech Lab.

In the meantime, a few brands are dallying with cool stuff on the side.

Jimmy Choo recently unveiled a heated lace-up urban hiking boot. It warms up via a battery in the heel, and then connects to a phone app so you can control and monitor the temperature.

Ralph Lauren has designed heated versions of its Polo 11 and Olympic puffer jackets (they are also controlled via an app).

Vuitton introduced wireless earphones made with Master & Dynamic technology and is testing a connected suitcase. And Levi’s has been selling its Commuter x Jacquard by Google connected jean jacket since fall 2017.

But the fact that all of those developments, which five years ago would have been trumpeted with drumrolls and bells and whistles, slipped in practically under the radar is reflective of the new state of . . . well, I wouldn’t call it estrangement, but rather a cooling off of the once heated relationship.

“The connected boot is playful and was just one of those things we kind of add on when it makes sense,” said Sandra Choi, creative director of Jimmy Choo, who added that the boot has been well received. It was not included, though, in the company’s presentation during the most recent Milan Fashion Week because it was not considered core to the Jimmy Choo identity, or even indicative of future direction.

Paul Dillinger, head of global product innovation at Levi’s, said much the same, noting that the connected jacket is positioned in Levi’s Commuter Collection, “which is a fairly niche area of the business.” When it came time for the next season’s release, instead of offering a new style or a new product, the company chose to offer the same product ? with new applications.

“We put the creative energy of fashion design into the jacket’s digital collateral rather than physical collateral,” Dillinger said.

So what have we learned from the last five years? Maybe that the real future of fashion and technology has nothing to do with screens. Maybe that the concept of a “hero product” that is so associated with the world of technology doesn’t really work in the context of an industry that already has its own hero products (Hollywood might take note of that one).

Indeed, Dillinger said he was initially quite sceptical about the idea of the Jacquard.

“I really value the objects of fashion for being what they are,” he said.

It’s possible we don’t actually want our clothes, or our accessories, to do much more than they already do, which is make us feel good and be tools of self-expression, symbols of membership in a group, clues to aspirations.

That’s what the phone did. And, though no one necessarily saw it coming, what AirPods and Vuitton earphones – which cost almost $1,000 (around €890), but which, since their introduction in January, have sold three times more than the second-generation LV smartwatch released at the same time, and currently have wait lists – are doing: acting as visible semaphores of identity.

According to IDC, by 2023 “ear worn devices” will be the second-largest category of wearables, accounting for 31 percent of the market.

By contrast, it predicts that smartclothes will account for only around 3 per cent.

In other words, that drumroll in your head? It’s actually hearables.

Though personally I like “earwear” better. – The New York Times News Service