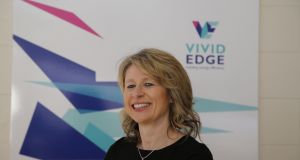 Tracy O’Rourke spent most of her career in financial services and aircraft leasing before striking out on her own to set up energy efficiency company Vivid Edge four years ago. O’Rourke is no stranger to high-growth start-ups. She has worked for a number, including Milestone Aviation, which was acquired by GE for $1.8 billion (€1.59 billion) in 2015.

Vivid Edge’s business model is energy optimisation as a service and it helps organisations upgrade their energy infrastructure without using their own capital. Instead, Vivid Edge puts up the money and customers pay for it on a monthly basis with a fixed service fee. How much they pay depends on the value of the project and on factors such as its risk profile. “Our customer offering is simple, but behind it is a smart risk model based on our in-depth understanding of energy efficiency as an asset class,” O’Rourke says.

The company’s service is aimed at large energy consumers with an annual bill of between €500,000 and €1 million-plus. Vivid Edge has raised €30 million to fund its projects from a large European energy efficiency fund and its deals will typically be revenue generating for at least eight years. The company’s first customer was a large hospital and it is also looking at projects in food and data processing, pharma and telecoms, covering areas such as lighting, heating, cooling and chilling.

“Ireland is a great place to start an international business because it’s the European or global HQ of so many multinationals,” O’Rourke says. “We are expanding abroad by following the international footprint of our customers and supplier partners and our sales pipeline now extends from Ireland to mainland Europe, UK, Middle East and Africa.”

O’Rourke has always been interested in how business models can be transferred across sectors and this got her thinking about how the principles underpinning the success of aircraft leasing in Ireland – renting rather than buying – could be adapted to stimulate more investment in energy efficiency to meet climate change targets. “Doing something with a social impact has become increasingly important to me and I wanted to develop a new business that was commercially innovative but also fulfilled a social need,” she says.

Vivid Edge takes a hands-on approach to the projects it funds but its engineers work with customers’ preferred vendors once it is satisfied with the proposed technology and the calibre of those installing it. Funding packages are tailor-made depending on an organisation’s needs and can involve multiple locations and currencies. Projects may involve one element or many as it’s often the interaction between them that delivers the biggest impact.

“We’re addressing a lot of the reasons why more energy efficiency projects don’t happen and we’re particularly keen to mobilise those projects that wouldn’t happen otherwise,” O’Rourke says. “Energy performance contracts are most often abandoned due to complexity and economics. With our model cash is preserved for core business activities and our service is very easy to use.”

Vivid Edge is based at NovaUCD and is an Enterprise Ireland High Potential Start-up company with plans to grow to 30 employees. Investment in the company so far is €2.8 million from personal funds, EI and private investors.

“Our aim is to make energy efficiency compelling for large organisations because climate change is no longer about far away polar bears and rainforests,” O’Rourke says. “Recent floods in Ireland cost five lives and €1.5 billion while in the US forest fires caused $3.5 billion (€3 billion) worth of damage and 85 lives were lost.

“Even the most successful companies have limits on capital spending and struggle to fund energy efficiency projects that might be good for the business but fail the payback test or lose out to higher priority investments such as customer-facing initiatives or compliance and regulation systems,” she adds. “However, organisations that don’t invest in energy optimisation are leaving untapped savings on the table.”