Getting high on your own water supply

Excreted byproducts of cannabis are increasing as territories legalise the drug 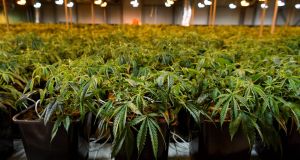 Remember what Gordon Gekko said in the film Wall Street? “Weed, for lack of a better word, is good. Weed is right. weed works.” Okay, that’s not so much paraphrased as totally inaccurate.

The legitimisation of any once taboo social practice allows opportunity for more balanced scrutiny of said social change once the dust has settled. Now that marijuana use is seen as not exclusively the preserve of hippies and layabouts, we can examine its pros and cons with a more measured approach, free from bias or emotion.

There might be no closer substance tied to the environmental movement than the ‘devil’s lettuce’. Perhaps the association was appropriate in the past, but the number of Gordon Gekkos investing in ganja nowadays in the United States are in it for the green that lines their wallets, where you’re not likely to find a membership card to Greenpeace.

Preoccupied by debate over the societal and human health implications of a dramatic rise in legal marijuana consumption, we overlook the risks associated with the waste it will produce in the environment, particularly water supplies.

If you’re in the business of novel drug development in the US, the holy grail is US Food and Drug Administration (FDA) approval for your product . Not only does it provide legal credibility to a new type of medicine/treatment/etc, it virtually guarantees sales will spiral upwards from the start.

Last June the FDA approved Epidiolex, a marijuana-based drug developed for the treatment of a rare form of epilepsy. Sales in the US are expected to exceed €1 billion by 2022, which represents a 1,100 per cent increase in consumption levels in less than 10 years.

The overall legal marijuana market is expected to be worth €19.5 billion by 2022.

As consumption grows, so too does human-excreted waste containing cannabinoid-based by-products – chemical compounds that act on the brain’s neurotransmitters – increasingly flowing into our streams, lakes, rivers and oceans.

This is nothing new. Every year, novel pharmaceuticals and personal care products are introduced by the healthcare industry. The most common pharmaceuticals already excreted into our water-treatment systems include antibiotics, anticonvulsants, antidepressants, beta-blockers, analgesics, anti-inflammatory drugs, hormones and psychostimulants.

I hear you scream: “So, what’s the difference, narc?” The above mentioned drugs have been well studied and transformation pathways are well understood. Cannabinoids are one of the least studied class of emerging contaminants (ECs) in our water systems – chemical compounds newly introduced into natural water systems, either as new chemicals or as the by-products they produce during the transformation process, which occurs when released into engineered water systems.

In short, ECs are harmful to your health in various measures and more and more of them are being found in water coming out of our taps.

Substances called halogenated methanesulfonic acids, a new class of organic micropollutant produced from an approved drug, were the most recent addition to the list of known ECs prevalent in the water cycle. It is believed cannabinoids may introduce similar compounds as they pass through engineered treatment systems.

As the annual development and release of pharmaceuticals and personal care products continue to expand the list of ECs entering our water supplies, all we know at this point is that cannabinoid molecules transform in both natural and engineered systems and thus render a higher level of uncertainty regarding their toxicity.

It’s no simple task trying to understand the impact of a newly-introduced drug’s by-products created through human waste. Weed has it own set of unique variables thrown in top of the existing challenges. Marijuana is already being illegally consumed and has been so for a century or more, making it extremely difficult to crunch the numbers on mass production levels.

We know it causes health problems, such as adverse effects on the nervous system, and increased pharmaceutical use of the drug is only going to drive consumption levels higher. But distinguishing between any harmful effects resulting from illicit marijuana production and that which is grown in a controlled environment for medicinal purposes makes it even harder to know how much is being consumed, not to mention which strains – there are hundreds, with names ranging from the innocent-sounding Orange Kush to the more ominous Green Crack – are causing more harm than others.

Human waste treatment isn’t exactly the most popular topic of conversation. However crude, though, it’s time this conversation was started. We are putting ourselves at risk by not considering what impact transformational chemical processes may be having on our health, not to mention the long-term effects there could be on fish, plant life, soil content and all the other vital elements that make up our natural environment.