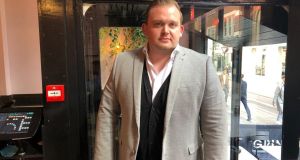 Ivano Cafolla: ‘The biggest problem in the industry is splitting bills and we have solved that for them’

Ivano Cafolla is well rehearsed in Dublin’s social scene. Promoting events, venues and nightclubs has always been part of his CV so it’s no surprise that his new venture would involve the same industry, only this time it incorporates tech, in the shape of his new app Zazu.

“We are a booking and payments facilitator for the bar, restaurant and nightclub industry,” explains Cafolla. “I always wanted my own venue and I got the chance to take my own venue on which was No.5 Vinoteca, a piano and cocktail bar and from that Zazu came because of my frustration with the lack of consumer facing booking apps. When we had the Italian guy trying to spell the Irish name, the email would always be wrong or the Irish guys trying to spell the Italian names or different nationalities’ names, the details were always wrong. That’s where the app comes in handy.”

There are two versions of the app, one for consumers and the other for the merchants. The app is available on all mobile platforms and is aimed at both domestic and corporate use.

“Its massively important from a domestic point of view but from a tourism point of view if we could get Tourism Ireland or Fáilte Ireland to talk to us we could make tourists’ lives a lot easier with no language barrier. A tourist could effectively book their breakfast, lunch and dinner and nightclub experience with Zazu without physically having to talk to someone who doesn’t speak their native language.”

Cafolla feels the main feature Zazu brings to the table, where similar apps don’t deliver, is the bill splitting facility that not only works for social customers but can also help out consumers working in a self-employed environment who need to account for their spending.

“The biggest problem in the industry is splitting bills and we have solved that for them. The biggest response that we are getting at the moment is for the splitting the bill feature. The biggest nightmare for venues and consumers is at the end of the night people want to pay with different cards, cash or vouchers.”

Once the venue has been booked on the app, all those in the party can join the booking through the app on their phones. At the end of the meal the merchant will take a photo of the till receipt and send it via an app notification to the party, including total amount and booking number. The party can then either split the bill equally or choose to pay for what they had in separate amounts while the waiting staff are free to go about their duties until all transactions are done.

“Let’s say out of 10 people, two people don’t have the app, and they don’t want to download the app, the venue will be notified that there is a cash balance at the table to be collected. We have covered those basics because obviously at the beginning not everyone will have the app. Hopefully after a couple of months everyone will. The venues are loving this so much because if you have a waiter or a waitress at a table trying to split a bill for 10 people that can take up to 10 minutes - that’s 10 minutes they are not serving their section.

“With Zazu everyone gets a copy of the till receipt but they also get a copy of the receipt for what they pay for so we are doing their expenses for them. We partnered with Stripe so we actually don’t hold any of the customers credit card details. Now when a consumer downloads our app they can store multiple cards on our app, we don’t see that, that is held with Stripe.”

Zazu has signed up over 60 venues to date and are currently in four Irish cities, Dublin, Cork, Galway and Belfast. The app allows customers to book tables in restaurants, reserve areas in bars and pre-pay entry to nightclubs so clubbers can skip the queue system.

Another feature being added to the app within the next month is Zazu Groups where the likes of hen and stag parties can preload a kitty on to the app. Again each member of the group will be required to download the app so they can upload money into the digital kitty leaving the revellers more time to enjoy their pursuits by spending less time trying to navigate their wallets.

“We just closed a round of funding. We registered ourselves up North so we have an office in the UK – we were able to avail of SEIS status in the UK, the Seed Enterprise Investment Scheme, it’s a massive tax relief for UK companies.”

Damien Cox, co founder of the UK based outdoor advertising company Wildstone, was keen to invest through SEIS where investors can invest up to £100,000 (€116,063) in a tax year and receive a 50 per cent tax relief, total investment is capped at £150,000. Cox wants to see the company rolled out in the UK fairly quickly so that has taken on more growth for the start-up.

“We have just hired a marketing executive, we have a head of sales in Northern Ireland and are hiring one in Munster. We are a small team but we are growing which is a good thing.”

While growth may be on the cards for Zazu, what is guaranteed is the reduction in the stress points during a night out, splitting the bill and queuing in the Irish weather to get into a nightclub, it’s all starting to sound rather like a well known beer advert.