Need a handyman not a cowboy? TaskMatch finds workers you can trust 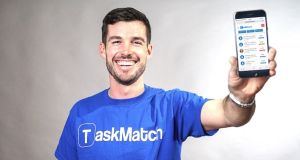 TaskMatch’s Conor Lyons: “I would just get calls nonstop, can you help me with this, from family and friends. Now I just say to everyone, post it on TaskMatch.”

“I always had TaskMatch in the back of my head. I was always trying to see how could I facilitate connecting people looking for services with people online, in a more trusting manner.”

Ever thought of a few jobs around the house that need doing but don’t have a handyman in your contacts list to call on? This is where the online task-matching platform, co-founded by Conor Lyons, could prove useful. The service aims to bring customers and workers together in a convenient and trusting environment.

“There had to be a better way of bringing a bit more trust into finding people online because we’ve kind of gone past word of mouth – the younger generation are going online to find people,” says Lyons. “The dual review system was always something I loved with Airbnb – I’m a big user of Airbnb and Adverts and those platforms and genuine reviews, not like Google review where anyone can review your business even if you’ve been there or not.”

The idea behind the ethos of TaskMatch came while Lyons was running his own AV company, which he has done both here and during his time in Australia. People wanted to know who the stranger was calling to their house, with the need for security and familiarity. Having the dual review system on the TaskMatch platforms not only gives you a review of the worker and their skills but also the customer.

As both an electrician and an AV engineer, Lyons got quite the reputation for being the handyman amongst his friends.

“I used to get harassed by people by having a van, being an electrician, being an AV engineer and all-round handyman. I would just get calls nonstop, can you help me with this, from family and friends. Now I just say to everyone, post it on TaskMatch. I love it.

“I don’t come from a developing background so I had to obviously find out what it was going to take to build a platform of this scale. I was probably a bit naive going into it – I didn’t know the extent of what was needed or the functionality of what was needed. My first cousin is a developer, a UX and UI designer, so I met up with him and he’s been a very good at giving me information. He’s one of our trusted advisers at the moment for everything.”

Lyons was lucky enough to get on Enterprise Ireland’s New Frontiers programme, and throughout the phases was able to build the platform he was looking for and the team that he needed to do it,but the process was a huge learning curve for him; when you have no background in development, learning about the process can be quite the eye-opener.

“We soft-launched it to friends and family and a few people we knew to get some feedback. The main teething problems were all development-related, so there was just so much in it, so many buttons, just so many. I’ve learnt a lot about development now and different browsers. Everything that you do can throw something else off course, so there was a lot of learning. It was finding the right people as well – as we are a start-up business we were trying to get really good developers on a budget. Now we have a solid team and they are all very interested in the idea and believe in it. I’m delighted with it and I have a lovely, modern design and bug-free site, which is nice to say after working on it for so long.”

The platform is currently a website which is mobile-friendly. Given that 70 per cent of the traffic TaskMatch gets is coming from mobile, thoughts are turning to an app in the future. It’s a huge investment for a start-up, however, so for now honing in on the marketing and creating revenue is the main priority.

“We don’t want anyone to be paying us unless they are doing work on it, so we don’t charge you to sign up. If your offer on the job gets accepted then you pay the money so you can have your profile set up on it all year around. We take 10 per cent off the worker – when they are making the offer to complete the job it’s broken down for them. We say, this is your offer, this is the service fee, and this is what you are paid after, so make sure you are happy with the end fee that’s going to get paid into your bank.

No job seems to be too small for this site, with postings such as: someone to decorate a Christmas tree; someone looking for a puppy pal; or someone looking for someone to assemble their Ikea furniture. The motto of TaskMatch is they will do their utmost to match you with someone with the skillset to do your task, with their USP being the element of trust you don’t get from the classifieds.

“At the moment it’s being funded by personal savings from myself and angel investment from family and friends. We are doing a bootstrap model where we are just trying to get workers on the site but we are actively looking for funding and will be in the future if the right opportunity came around.”