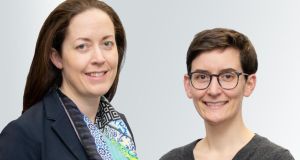 Sisters Aisling and Fiona Snow are the co-founders of medtech start-up CombiMark, which has developed disposable X-ray markers to replace the current practice of reuse.

Markers indicate the right or left side of the anatomy on an X-ray and as such are widely used in X-ray departments, operating theatres and intensive care units. However, consultant radiologist Dr Aisling Snow says it’s time for the dated practice of reusing the markers to change.

“Reusable markers carry the risk of spreading hospital-acquired infections if not stringently cleaned,” she says. “Hospitals and radiology departments have been slow to recognise that these legacy markers are in fact medical devices. As such they fall under the guidelines for reusable devices and should be decontaminated after each and every use.”

Snow adds that existing markers are also prone to non-use for a number of reasons including concern about spreading infection in an ICU,0 for example, or because they have been misplaced. “Non-use of X-ray markers leads to a risk of incorrect image interpretation. This could result in wrong-side surgery, which could even be fatal in some cases,” says Snow, who is a senior clinical lecturer in paediatrics at Trinity College and a consultant paediatric radiologist at Our Lady’s Children’s Hospital in Crumlin.

Disposable markers are available but they are expensive and some contain materials unsuited to use in healthcare settings such as latex. Having observed these problems at first hand, Snow saw the opportunity to develop a competitively priced disposable marker made from more appropriate materials that also ticked the biodegradable box. She then turned to her sister Fiona, an industrial designer who specialises in turning concepts into products, for help to make it happen.

“The fact that the marker is sustainably disposable is ground-breaking in medical device design as it is 100 per cent plastic-free and made with a low-intensity manufacturing process. Once disposed of, SideSafe markers decompose and turn to dust,” Snow says. “Traditional markers often go missing and people don’t have time to go searching for them. By having markers always within arm’s reach, instances of non-use can be greatly reduced and patient safety improved.”

CombiMark was set up in September of this year and is in the process of becoming a Trinity College spin-out. Start-up costs have been bootstrapped at less than €70,000 as the sisters have been able to do much of the development work themselves. The company has received competitive-start funding from Enterprise Ireland and is scheduled to take on its first two employees in 2019, with a further seven to follow in 2020. A fundraising round of €500,000 is scheduled for early next year.

SideSafe is aimed at those managing radiology departments and those with clinical quality-improvement roles. Its market potential is global as more than 2.4 billion X-rays are performed worldwide each year. More than 200 million are performed in the United States alone so breaking into the North American market is a priority. This is never easy for a small company, but Snow knows the lie of the land having worked in Boston Children’s Hospital and as an instructor in radiology at Harvard Medical School.

Side Safe is going into live test mode this month at Our Lady’s Children’s Hospital in Crumlin. The product will be tweaked based on the feedback received and a further testing period with additional hospitals will start early in 2019. Snow says the product will be commercially available from quarter two next year. The initial test markers have been handmade in Ireland, but it is likely that full-scale manufacturing will be outsourced to Asia.

SideSafe is CombiMark’s launch product, but Snow says the company is not a one-trick pony. “Disposables are highly appropriate in numerous clinical settings but sustainability is really becoming an issue with new guidelines being issued all the time. It is a big challenge to produce disposables sustainably and this is where we see our company going in the years ahead.”