Alt energy goes mainstream in US with Texas leading the way

Now that wind and solar are becoming cheaper than fossil fuels in many parts of the country, coal, oil and gas have lost the one thing they had going for them: price 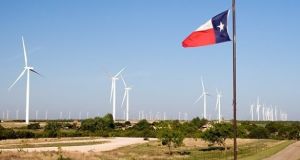 Texas, the state synonymous with oil and gas, has become the leading supplier of wind energy in the United States.

Ignore the vapid efforts by the US administration to resurrect antiquated energy industries like coal. Economies of scale have provided wind and solar power suppliers the capacity to compete and win on price in several regions of the country. The free market has spoken. Politics will listen.

The leading supplier of wind energy in the United States is Texas. That’s right. The state synonymous with oil, gas and a widespread, consensual denial that climate change is a thing, is defying stereotypes.

Texas added more generating capacity than any other state in 2017 and has continued increasing its wind power capacity to the point where it is now the sixth-largest producer in the world (the other five players being entire nations).

Wind and solar still suffer from inefficiencies but proponents with the luxury of enough land to build supersized solar and wind farms can reach that critical mass needed to sell green energy in high volumes at low prices.

About 40km north of Austin, lies the small city of Georgetown, a conservative, Republican stronghold whose inhabitants have voted for the Grand Old Party presidential candidate in every election since 1976.

All the electricity provided by the city to its 50,000 citizens comes from wind and solar. Why? City officials decided not to renew its decades-long contract with oil and gas suppliers looking elsewhere for their energy needs. It was a no-brainer: wind and solar providers were more competitive.

Do the people of Georgetown give a stuff about the environment? Probably not. To quote the straight-talking, A&R rep Bobbi Flekman in the 1984 movie, This is Spinal Tap, “money talks and bullshit walks”.

Every major oil and gas manufacturer with interests in the Texas Gulf coast, from Exxon Mobil to Schlumberger is pumping millions of dollars into green energy research. Even free market capitalism can lead to positive outcomes when a good idea happens to align with the interests of shareholders. This is one of those times.

This ain’t just the new normal for the Lone Star State. Oklahoma, Iowa and California have also found much of their energy needs blowing in the wind.

And in June, NV Energy owned, by Warren Buffett’s Berkshire Hathaway, announced plans to be the first investor-owned utility to be 100 per cent renewable energy by 2020 – by using wind and solar farms.

Anyone with even a vague understanding of Buffett’s approach to business investment will know he bets on commodities people want and will continue to want. Buffett only invests in sectors where ongoing demand is as certain as death and taxes. And alternative energy has peaked his interest for almost a decade now.

It’s not just the stupidly rich that see the future of energy being alt. In Minnesota, a growing demand for qualified workers for its burgeoning green energy industry led the Minnesota Department of Corrections to start offering solar installation courses to inmates prior to their release dates.

I will admit, I am an optimist. However, it’s clear the US administration’s attempts to reverse any and all green energy initiatives implemented during the Obama era (including plans to abolish federal subsidies for households who wish to erect solar panels on their homesteads), are at best misguided, at worst, cynical moves designed to appeal to a political base of climate change denying, gas-guzzling voters.

It’s akin to elected officials proposing a return to steam-powered trains for our transport needs while all anyone in the motor industry can talk about these days is driverless electric cars. There were even some concerns raised in recent weeks that the pace of innovation in the electric car industry is so rapid, it will result in supply of electric power from wind and solar falling short of the demand needed in the next two decades for electric vehicles.

Attempts to resurrect antiquated industries like coal are going to fail. The market has spoken. Now that wind and solar are becoming cheaper than fossil fuels in many parts of the US, coal, oil and gas have lost the one thing they had going for them: price. Alt energy has gone mainstream with the most unlikely of states, Texas, leading the charge. Trump and Co are, yet again, on the wrong side of history. The only difference in this instance, however, is that they know it.