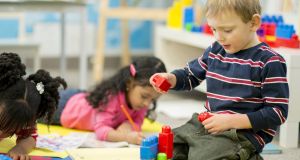 Learning by building: Lego in bygone days was a dedicated building toy with just a few different brick sizes to work with but plenty of room for imagination and the creation of something different each time. Photograph: Getty

How many of your children aged up to about 10 or 12 found a games console, smartphone or similar piece of electronic wizardry under the Christmas tree this year?

And how many of those children found Lego or a similar building toy when they started to tear off the wrappings? How about wooden building blocks? Or a train set, either the full-blown plug-in variety with a real electric engine and a requirement to assemble all the tracks or even just a wooden one whose carriages could be pushed along once the track building was complete? And why am I asking such a question in the first place?

Let’s look at the question from another angle. How many of these children received a gift that requires them to interact with the toy and I mean at a reasonable level such as building those train tracks or constructing something?

For the purposes of this rant this interaction does not include connectivity to a computer game or games on a smartphone, as the child is passive when engaging with the game.

It carries the player into an artificial world where you gain points or can trade for a better weapon by wiping out the “enemy”.

The game lets you choose where to go next but the virtual world that provides enemies to destroy and space to move though is predetermined. You need skill to use the weapons and good reaction time and also experience of other games is useful to be able to guess where secret entrances or energy or benefits might be hidden.

But at the end of a day’s playing in such a world, nothing has been created and there has been little requirement for innovation.

There is a value judgment coming next that some might resist. Building toys are different. The working parts come out of the box and have to be assembled. You could argue that the train sets, wooden or electric, are typically only assembled in the format shown on the box.

But after a while the child sees you can make the tracks go where ever you want, oval, circle, figure eight with an overpass, lane switching, train stations, and so on.

Building toys are similar. After building the structures shown on the box the child will begin to innovate, change the expected pattern, produce something new.

But if the child can be encouraged to innovate, to build something different, they quickly learn that the bricks from one toy can be assembled into anything they want just by combining them in a different way.

An easy counter to this view is seen in building sets such as Lego which provide all the pieces needed to make a given object – a spaceship, a castle, a famous building. There is no immediate assumption that the child will do any more than build the object and then leave it sitting on a shelf.

But if the child can be encouraged to innovate, to build something different, they quickly learn that the bricks from one toy can be assembled into anything they want just by combining them in a different way.

For the record, Lego in the olden days was a dedicated building toy with just a few different brick sizes to work with but plenty of room for imagination and the creation of something different each time.

There are of course a few electronic games that can foster creativity, with a good example being Minecraft. This game encourages players to build unique structures that can be further developed provided you discover the resources needed to continue to build.

The buildings that arise are the creation of the child and every game can be different. Success depends on how well you innovate and improvise, so it is possible to have online play with a high degree of creativity.

So what am I trying to say? That the need to innovate when children play is slowly but steadily diminishing. The requirement for creativity during play is seeping away and the current generation of children will not be the better for it. Smartphones can do the talking for you by allowing the device to select the words to build a text sentence.

Computer gaming makes it easy by giving you a prearranged space to move though and plenty of baddies to kill off. You don’t need to do any thinking, just dive in and start shooting.

Smartphones in particular have integrated themselves into our lives with no apparent way to roll back the clock on the impacts they may deliver. It becomes easier and easier to let the machine do it for you. If you don’t believe me all you have to do is ask either of the electronic personal assistants, Alexa or Siri. They sit quietly and listen to everything you say and to the words you use to be able to interpret the topic of your otherwise private conversations. And you thought they were only trying to help.

Park the games and think about where the ability to innovate comes from as children move into adulthood. Creativity is essential to succeed in business and to advance society and more, not less creativity is needed. If people don’t learn to innovate as children how will they do so in later life?

1 Cosgrave Property Group secures exit from Nama
2 How long can Government afford to keep State pension age at 66?
3 Revenue publishes list of companies tapping State for wage support
4 Corporate America is breaking with Donald Trump
5 Developers may need to go back to the drawing board as one-beds fall from favour
Real news has value SUBSCRIBE