The top six trends in artificial intelligence for 2019 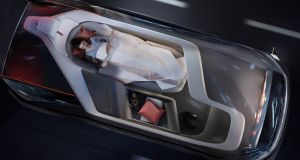 In the pipeline: Volvo’s 360c “bed on wheels” is still a concept at this point 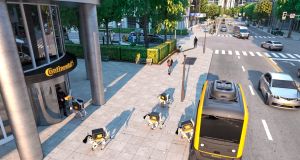 Continental envisions a future where robo-dogs will deliver packages 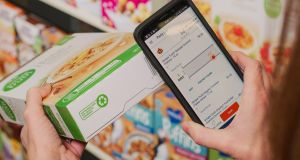 Microsoft has partnered with US supermarket chain Kroger to create the ultimate “connected store experience”.

It’s not all robot delivery dogs, self-driving cars that let you snooze, or digital assistants that can tell you need to talk about your day. Although these real examples of artificial intelligence developments are simultaneously terrifying and exciting, they are more indicative of what is to come in three or four years – Volvo’s 360c “bed on wheels” is just a concept for now while Huawei is still working on their emotional AI software. Fresh from a CES demo, Continental’s robo-dogs are just about hot to trot, so to speak.

But the best way to predict what people will be talking about in AI in 2019 is to take a look at what happened in 2018 and pay close attention to those end of year reports issued by industry, academia and special interest groups for their expert insights into the year ahead.

While some areas continue to steadily grow – machine learning and deep learning – others will creep up on us, suddenly feeling as ubiquitous as the smartphone while steadily becoming capable of increasingly complex behaviours: the AI voice assistant. Meanwhile, there are a few surprises like the arrival of Minority Report-style advertising and the rise of sophisticated computer vision.

The AI Index 2018 Annual Report provides data-driven insights into progress in artificial intelligence research and application over the past year, giving us a valuable source from which we can predict trends for the year ahead. Published by the Human-Centered AI Initiative at Stanford University in December 2018, the report gathers information from activity across research and industry, including the jobs market, as well as public interest in AI as measured by sentiment in media coverage.

Meanwhile, Microsoft’s December 2018 report, Artificial Intelligence in Europe: Outlook for 2019 and Beyond, gives us a glimpse of how AI will affect the workplace.

1. The rise and rise of voice search and smart speakers

The keyboard and touchscreen continue to take a back seat as voice search through digital assistants becomes commonplace: according to UK customer engagement firm Edit, 40 per cent of adults use voice search on a daily basis while Comscore predicts that by next year, this will rise to half of all internet searches.

When we are not invoking Siri, Cortana or Google Assistant on our mobile devices we’re doing it elsewhere: one in six Americans now own a smart speaker like Amazon’s Alexa-powered Echo. According to the report from NPR and Edison Research, this figure has risen by 128 per cent since January 2017. At this rate, we can predict an exponential rise that could lead to one in three by the end of 2019, especially considering Apple’s relatively recent addition of its HomePod to the market.

As with our smartphones, these devices are becoming an integral part of our lives: a Google/Peerless Insights report found the people tend to keep their smart speaker in a common room, ie livingroom while 72 per cent of users say it has become part of their daily routine. Alexa, what is the hottest AI skill in 2019?

Here’s what I found: jobs in AI calling for knowledge of deep learning are growing at a faster rate than any other area according to data gathered from job recruitment site Monster. com. Deep learning is a form of machine learning that develops algorithms known as artificial neural networks which work by modelling the structure and function of the human brain.

While machine learning is the most common skill listed as a requirement for these kinds of roles, the number of jobs requiring deep learning has increased 35 fold between 2015 and 2017. Although deep learning is far ahead of the pack, there is also a fast growing interest in graduates versed in computer vision.

Deep learning is being applied in many areas of AI including the aforementioned computer vision, autonomous vehicles, and automatic text generation (although “new” works of Shakespeare or poetry generated by these neural networks are still at a very early stage).

For those eager to gain the kind of skills to maintain a competitive edge in the jobs market there is also steadily growing demand year on year for those versed in general machine-learning techniques, natural language processing (NLP), speech recognition, and robotics.

Like it or loathe it, advanced computer vision means that AI-driven personalised advertising is finally becoming part of the retail experience. Earlier this week Microsoft announced a partnership with US supermarket chain Kroger to create the ultimate “connected store experience” with two pilot stores, one opening in Microsoft’s hometown of Redmond and the other in Monroe, Ohio (near Kroger HQ).

Shelves in these supermarkets will ditch paper price tags in favour of real-time digital versions that also display promotions and nutritional information while working with Kroger’s Scan, Bag, Go app to guide you through the store based on your shopping list.

The Minority Report part involves cameras with facial recognition: when passing in-store digital displays you will be shown ads and promotions based on your age and gender or, should you opt in, you will be greeted personally and have products suggested based on previous purchases. “Good morning, Marie. Would like to purchase more Ben & Jerry’s and white wine?” It must have forgotten about that time I bought a grapefruit.

The most important role AI will play in the business world is that of increasing customer engagement, according to a recent report issued by Microsoft. The report shows 74 per cent of all respondents expect in the near future that AI will help them win and retain more customers with this rising to 100 per cent for more advanced and mature companies. Additionally, 56 per cent of companies expect AI to have a large impact on “business areas that are entirely unknown today” while 65 per cent expect AI to have a similarly large impact on their core business.

With this confidence in and enthusiasm for AI, 2019 may be a turning point for AI integration: a mere 4 per cent of companies are actively using AI in “many processes and to enable advanced tasks” but 61 per cent are already in the process of planning or piloting how AI will transform their business model.

Where is AI most and least popular from a corporate standpoint? Microsoft’s report shows that, unsurprisingly, it is most widely adopted within IT or general technology related processes: 47 per cent of organisations who have adopted AI report this is its primary use. The second most popular use is research and development (36 per cent) followed by customer service at 24 per cent, so these are the areas we can expect the highest level of adoption in 2019.

5. Computer vision will shape the future of surveillance

Computer vision, as an area of AI research, has come on in leaps and bounds in the past few years: algorithms taking the COCO (Common Objects in Context) challenge have improved their precision by 72 per cent since 2015. The COCO challenge, according to the AI Index 2018 Annual Report, sets complex vision tasks that require more sophisticated reasoning, like pinpointing objects with pixel-level accuracy.

Another measure of advancement is how quickly computer vision algorithms can be trained on a standardised dataset of images – used by most research institutes – known as ImageNet. The average training time became 16 times faster between June 2017 and November 2018.

There are, of course, multiple applications for computer vision but one area that is concerning consumers and citizens, is automated video surveillance. A Japanese machine-learning algorithm called AI Guardman can detect “suspicious behaviour” among shoppers that may predict their likelihood to shoplift. The AI on board the camera processes poses in real-time, flagging movements that might indicate someone is about to swipe merchandise. This is linked to the shop owner’s phone, which receives an alert.

Similarly, this kind of computer vision is being put in drones that hover over large crowds, detecting potentially violent individuals. Perhaps you like the idea of preventing a riot, perhaps it will leave you quaking at the notion of throwing your frisbee lest you are accidentally added to a watchlist. Welcome to 2019.

6. Ethics will increasingly be ‘baked into’ AI

This past year has seen a rise in public scepticism around AI and rightly so. If all of these technologies are applied without rigorous ethical frameworks or with no input from the general public, we will continue to see applications that skirt privacy, ignore environmental and societal implications and even limit human autonomy.

With this in mind, we continue to see the emergence of ethics committees, organisations and frameworks specifically for AI. In December 2018, a draft was published of the AI Ethics Guidelines produced by the European Commission’s High-Level Expert Group on Artificial Intelligence. This group, of which the Insight Centre for Data Analytics’ Barry O’Sullivan is vice chair, has come up with several recommendations on a European level for development of trustworthy AI.

Trustworthy AI, it says, has two components: “1) it should respect fundamental rights, applicable regulation and core principles and values, ensuring an ‘ethical purpose’ and 2), it should be technically robust and reliable since, even with good intentions, a lack of technological mastery can cause unintentional harm”.

These guidelines, while not legally enforceable, are aimed at all relevant stakeholders developing, deploying or using AI, including companies, organisations, researchers, public services, institutions, individuals or other entities. The final version of the guidelines, to be published in March 2019, will have some sort of mechanism to make it easy for stakeholders to voluntarily endorse them.