Hyundai shows off its ‘walking car’ at CES 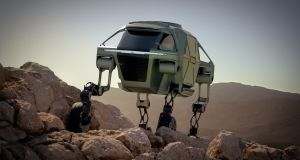 The legs can walk with a mammalian or reptilian gait, depending on what’s right for the terrain, and can fold up into the body, leaving the wheels touching the ground so that the Elevate can be driven like a normal car. It can climb a 1.5-metre wall or across a 1.5-metre gap

Korean car giant Hyundai has revealted its big showcase concept for the Consumer Electronics Show (CES) in Las Vegas, which bears a distinct similarity to the famed AT-AT ‘Walkers’ from The Empire Strikes Back.

The Hyundai Elevate’s is designed to tackles especially tricky or inaccessible terrain such as bringing medical help or emergency supplies to areas affected by an earthquake or tsunami. Or, on a less disastrous level, act as a wheel-chair friendly transport which can adjust its height and angle to make getting in and out easier, or even tackle stairs with the occupant still on board.

Because debris and broken ground from such an event can block the route of a wheeled vehicle, the Elevate gets about on a set of four raised-up legs, each with an individual wheel for a ‘foot.’ Hyundai says that it will: “Redefine our perception of vehicular mobility and take people where no vehicle has been before.” The legs can walk with a mammalian or reptilian gait, depending on what’s right for the terrain, and can fold up into the body, leaving the wheels touching the ground so that the Elevate can be driven like a normal car. It can climb a 1.5-metre wall or across a 1.5-metre gap.

“When a tsunami or earthquake hits, current rescue vehicles can only deliver first responders to the edge of the debris field. They have to go the rest of the way by foot. Elevate can drive to the scene and climb right over flood debris or crumbled concrete,” said John Suh, Hyundai vice president. “This technology goes well beyond emergency situations - people living with disabilities worldwide that don’t have access to an ADA ramp could hail an autonomous Hyundai Elevate that could walk up to their front door, level itself, and allow their wheelchair to roll right in - the possibilities are limitless.”

On a more realistic level, and a somewhat shorter timescale, Hyundai will also be showing off other high-end tech. The first, and the closest to production reality, is a new fingerprint access and ignition system which will make its debut on the Santa Fe later this year.

The tech is similar to that employed by smartphones, and includes a sensor on both the door handle and the engine start button, allowing totally key-free access to the car. A capacitive sensor looks for the distinctive electrical patterns in the finger as well as the actual fingerprint, so that the system can’t be fooled by a fake finger or an image.

Also on show will be Hyundai’s new Automated Valet Parking System (AVPS). This is an autonomous vehicle system with a difference. We’ve seen before proposed systems that can allow a car to drop you off at your destination and then go and find both a parking space and an electric car charging point on their own. Hyundai’s new idea is that the autonomous electric car will also have to be polite, and aware of the concept of queuing.

So, using your phone to instruct your future Hyundai to head off by itself, and it will find parking and charging without any human interaction. Once charged, though, it will then disconnect from the charger, and head off again to find another parking spot, leaving the charging space free for the next car that needs an electric top-up.

Hyundai, which is developing the tech alongside its sister company Kia, reckons it will be at least 2025 before that sort of system is actually available on a customer car.