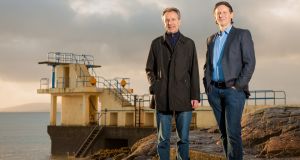 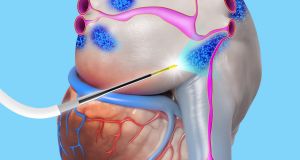 AtriAN Medical’s technology involves using a catheter to deliver short pulses of electrical energy into the clusters of neuronal cells in which the cardial arrhythmia originates.

Atrial fibrillation (AFib) is the most common form of abnormal heart rhythm, affecting millions of people worldwide. It is estimated that 9 per cent of people over the age of 65 suffer from the condition, which accelerates the progression of heart failure and increases the risk of stroke fivefold.

AFib is usually treated with drugs or a surgical procedure called PVI (pulmonary vein isolation), but both have high failure rates. In the case of drug therapy it’s 70 per cent while PVI has a failure rate of 50 per cent after three years. Now, however, the long-term outcomes for those with AFib may be about to change quite significantly for the better with the launch of a pioneering new treatment by Galway-based medtech start-up AtriAN Medical.

AFib is characterised by a rapid and irregular beating of the heart and is usually caused by damage to the heart’s structure. This results in the heart’s upper chambers being fed chaotic electrical signals that disrupt the regular rhythm. AtriAN Medical has developed a treatment that stops the errant signals in their tracks rather than blocking them once they have been initiated which is what existing treatments do. The company’s treatment is called mPEF – micro-pulsed electric field.

“In a nutshell, we have developed a technology that selectively targets the origin of the problem from outside rather than inside the heart and that’s very novel,” says AtriAN Medical co-founder and chief executive Ken Coffey. “Our technology involves using a catheter to deliver short pulses of electrical energy into the clusters of neuronal cells in which the arrhythmia originates. It destroys these cells without damaging the heart muscle and as such will provide a safe, durable and long-term solution for the treatment of AFib.

“The heart is an incredible machine that can beat on average once per second for 100 years. But as we age it gets affected by things such as stress, drinking too much or taking too little or indeed too much exercise,” Coffey adds. “These events can change the heart’s structure and affect its ability to beat with perfect synchronisation.”

One of the big concerns with AFib is that it can cause blood clots as if the heart is beating too fast its pumping action can become compromised and can fail to eject all of the accumulated blood. If this happens the remaining blood can pool and create clots. These clots are like little ticking time bombs that can travel and cause a stroke at any time.

“When the drug treatments – which can have serious side effects – fail, the next course of treatment for AFib is PVI, which uses either radio-frequency energy [heat] or cryotherapy [freezing] to locally destroy the vein muscle,” Coffey says. “This aims to prevent the electrical signals that cause the arrhythmia from entering the heart chamber. However, it is not a permanent solution and it is not without its downsides such as tissue damage, regrowth and other risks. Our approach treats the origin of the problem, it is a permanent solution as the cells we are targeting never regenerate and it doesn’t harm the healthy heart muscle cells.”

The original idea for mPEF came from Dr Sam Asirvatham, a world authority on heart rhythm and a consultant at the Mayo Clinic. However, Asirvatham is a busy clinician and researcher who didn’t have the time to move his idea on from the concept stage. His idea was patented by the Mayo Clinic and then filed away and effectively sat gathering dust until its potential was spotted by two academics from NUI Galway (NUIG).

“Mayo Clinic puts all of its internally developed ideas up for investment or licensing and back in 2014 we performed due diligence on a number of these technologies to identify one that could be further developed and ultimately commercialised through an Irish start-up. The atrial fibrillation technology was one of the first we identified and it appealed to us because there was a clear and definitive market of some scale for it,” says the company’s co-founder and chief technical officer, Barry O’Brien.

“NUIG then secured a licence from Mayo Clinic and we subsequently got development funding through Enterprise Ireland’s commercialisation fund. There were also some existing individual relationships between Mayo Clinic and NUIG and that significantly enabled this process. In particular, our co-founder Prof Mark Bruzzi already had a number of links with the clinic.”

The licensing agreement gave the Galway team access to all of the early research done on Asirvatham’s atrial fibrillation solution as well as access to the patent and to the catheter prototype. It then took roughly four years to develop the idea and complete longer, controlled studies. Both Mayo Clinic and NUIG are shareholders in what will shortly become a campus spin-out company.

O’Brien and Bruzzi both have long track records in biomedical engineering, but O’Brien says it still took them a good six months to investigate the solution and make sure that everything stacked up as it was supposed to. “We had to do a lot of research and reading to really understand what Asirvatham had come up with and how the technology would work as it was so completely different to existing approaches to treating the condition,” O’Brien says.

AtriAN Medical was formally established in 2017 and the company is now in the final phase of closing out its first round of investment which will see it raise in the region of €2 million. This will cover the cost of the first human trials. AtriAN employs three people and this will rise to 16 over the next three years.

Since 2010, about €2 million in grant funding has gone into developing the technology. This includes the early research at the Mayo Clinic and the more recent work at NUIG, which was supported by Enterprise Ireland.

Ken Coffey came on board in April last year to drive the commercialisation of the treatment. He is an electronics engineer by training and the former chief executive of a medical devices company with expertise in the area of gene therapy. Clinical trials on the product begin in 2020 with an initial study on 21 patients.

All going well, the next stage will be to begin the slow process of putting the product through all the regulatory stages, with the full commercial launch set for 2024. The company has yet to decide if it will make or outsource the production of the catheter device but for now it is being made under contract at a specialist manufacturing facility to meet regulations for testing on humans.