‘Bureaucracy is stifling innovation and we need to kill it’ 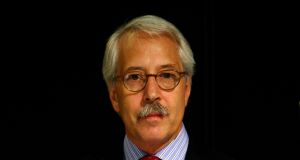 Gary Hamel: has tested many of his ideas through his consulting firm Strategos.

Gary Hamel is on a mission. Bureaucracy, he says, is stifling innovation and we need to kill it. It calls for nothing short of a revolution in the way we run our organisations. Too much lip service is paid to innovation and the rhetoric is not being matched with practice.

“I have never met a CEO who thinks bureaucracy is a good idea, but I have rarely met one with a plan to kill it,” the leading management strategist tells The Irish Times before addressing the recent Global Peter Drucker Forum in Vienna.

“Every major company in the world has re-engineered its operating model for speed and agility with enormous investments in back office and optimising supply chains but that’s not enough. Now we need to re-engineer the management model for innovation. How do we hire, how do we compensate, how do we allocate resources, how do we plan, are questions we need to ask but most importantly we need to know, what do we do here that frustrates innovation?”

This form of re-engineering can be done, he maintains, and a stand-out example for him is the 75,000 employee Chinese consumer appliance corporation Haier, a firm that has executed a root and branch reform of how it operates. It slashed management layers and now has an innovative ecosystem of users, inventors and partners that has replaced its traditional hierarchy. Haier’s revenues have grown by 23 per cent annually since it made these changes and it has added more than $2 billion in market value from new ventures.

Another breakthrough concept that could really help, he says, is to firmly link compensation to innovation efforts – not just in the C-suite but throughout the organisation. Indeed, Hamel, who has spent much of his career consulting in the boardrooms of some of the world’s largest corporations, has a surprisingly sceptical view of those at the top in terms of their ability to lead innovation.

“Any innovative project has to get signed off at the top and often these leaders have a lot of their emotional equity invested in the past. They built the old business model and they often feel compelled to defend decisions that they made a decade ago or more. They typically don’t live close to the bleeding edge of technology or they may not be in touch with customers and yet they are called to arbitrate where and how the company innovates and that’s a fundamental problem.”

It’s a common mistake, he says, for chief executives and top-line management to think they are the ones to lead strategy.

“So, what happens when the speed at which an entire organisation can change is a function of how a few people at the top are willing to write off their depreciating intellectual capital? That happened at Microsoft and indeed many other large companies and so you have to create an internal innovation market where people can innovate in small ways and get projects funded and where the role of the CEO is not to be the strategist-in-chief but rather to be the one to create enough experimentation so that the odds of finding the future are reduced.”

Bureaucracy has spread like a weed in recent decades, he notes. In the US and throughout much of western Europe, large organisations typically now have twice as many managers as they had 30 years ago.

“It’s a control mechanism which has traditionally been a very important organisational virtue but today in our companies we have all kinds of other mechanisms for control – KPIs and project reports and reviews etc, but we very little that positively supports curiosity, creativity, experimentation and prototyping. Innovation is being outgunned by the mechanisms of operational control.”

Bureaucratic control creates a low tolerance for risk-taking, with its inevitable high failure rate. An exception, he notes, is to be found at Amazon where chief executive Jeff Bezos defines his role as to help create the world’s biggest laboratory and who talks about how many times his organisation makes mistakes, characterising Amazon as “the best place in the world to fail”.

In the sphere of management thinkers, Hamel has few peers. His reputation as one of the world’s leading business strategy thinkers was sealed with his 1994 book Competing for the Future, co-authored with C K Prahalad and he has gone on to be the most reprinted author in the history of Harvard Business Review as well as writing several other highly regarded books on strategy.

He is credited with coming up with some of the leading management concepts of his generation including the notion of core competence and has been rated one of the world’s most influential business strategy thinkers by The Wall Street Journal, The Financial Times and Fortune. A distinguished professor on the faculties of both Harvard and the London Business Schools, Hamel has also tested many of his ideas through his consulting firm Strategos.

It is not alone possible but urgent to bake-in a culture of innovation in organisations and to abandon the idea that innovative thinking is the preserve of a special few, he notes.

“There are habits or perspectives that innovators have that you can teach people. We can train people to recognise industry orthodoxy – when everyone is making the same assumptions and how you challenge that in a smart way. We can teach people how to discover the unarticulated needs of customers, the deep frustrations and desires of people that we are not even aware of, how to be observant and how to read emotional cues and to see those needs.

“You can train people how to see the changes in the world, in terms of lifestyle and technology and to be constantly asking if we addressed that trend, what would we need to do differently. We’ve done this in hundreds of organisations around the world and it has created hundreds of billions of dollars in market value but it is amazing to see how many CEOs will say that we are really serious about innovation here but if I ask them how many of your people down to admin assistants and store clerks are trained to be innovative they say that we have not done that.”

Strategos did a survey with Harvard Business Review of 10,000 managers recently which showed that 76 per cent of new ideas generated in their organisations were treated with scepticism or outright hostility, suggesting that the rhetoric is not matched by reality on the ground.

“Every leader I know tells me how serious they are about innovation. I say, Let’s start by asking what you mean by serious, because if you have not trained your people to innovate and you don’t make it easy and you don’t hold people accountable, I don’t know how serious you are,” he notes.

Another misconception, he says, is that effective innovation comes from big bets which the evidence shows it doesn’t. It is not about money or resource. “Innovative start-ups typically don’t have a lot of money. They win by the quality of their ideas and the speed of their execution not because they are going to outspend the incumbents.”

So, for Hamel, the argument about the difficulty of abandoning models that have worked in the past and appear to be still working today – and the potential back-lash from financial markets obsessed with quarterly earnings if companies truly embrace innovation – is not one that holds water.

“If I see a company that has no history of entering new markets or strong organic growth and the CEO is telling me I’m hamstrung by the investment community, I would say, lets test that proposition. See if we can find a game changing low-cost way of experimenting or partnering to multiply its resources. And then let’s see if it’s the investment community’s problem or its the organisation’s own ability to innovate and grow that is the problem.”

Unilever is a stand-out example, he says, of a corporation that told its shareholders that it would do the right thing in the long-term interests, regardless of its short-term impact on margins of being innovative.

It’s time to be bold and brave is his message.