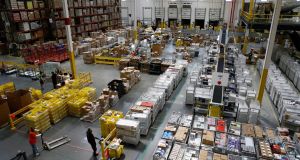 An Amazon fulfilment centre in Baltimore. These centres are where the majority of Amazon’s 500,000 employees work. Photograph: Patrick Semansky/AP

With almost half a million employees, and counting, worldwide, Amazon’s decision to raise its minimum wage to $15 (€13) per hour will cost them dearly. But CEO Jeff Bezos isn’t worried. He’s keeping his head firmly in the cloud anyway.

Why is it that most Americans who vote red tend to see red when the word “communism” is mentioned? Unless within a context outlining all the reasons why the practical application of Marxist philosophy was, is and shall forever be considered an abject failure, it’s not just Republican voters blinded by the past. Many Democrats can’t stand the C word either.

It’s easy to overlook how many established, social and political norms – such as state-subsidised education, access to healthcare, social welfare, even certain advances in gender equality – were socialist gifts given to the West by those living behind the Iron Curtain.

Senator Bernie Sanders is the exception to the rule. He has often been criticised for espousing ideological but impractical economic solutions to America’s ills. However, the Vermont senator may have just successfully exhibited one of the great examples of real politik in recent American history.

News that Amazon is to raise its minimum wage to $15 an hour, was the result of several factors. However, Sanders’ relentless pressure in highlighting a Bill – named Stop Bad Employers by Zeroing Out Subsidies Bill – would likely never have passed. But by raising it time and time again he left Bezos with no other choice but to raise the minimum wage for its US and British workers to $15 per hour and £9.50 (€10.90) or £10.50 (€12) in the London area.

Last week Laura Slattery reported the announcement from the world’s richest man came after a series of strikes in Spain, Germany and Poland combined with the persistent criticism from Sanders and his nicknamed “Stop Bezos Bill”.

Not only did Sanders understand he could circumnavigate a political system dominated by mean-spirited conservatives, he recognised how major corporations are now more influential, in some respects, than government anyway.

The timing of the wage increase, however, is significant too. Amazon employs over half a million people worldwide and most of them work out of one of its so-called “fulfilment centres” – storage facilities used by the company to keep all that stuff we mostly don’t need but can’t help buying anyway.

Operated through the joint co-operation of robots and humans, one Amazon employee, who wished to remain anonymous, told The Irish Times it would take a little more than some heckling and a few incendiary tweets from Sanders to force Bezos’ hand. “There have been some negative reports about worker conditions in these fulfilment centres, possibly in the hundreds,” they said. “But that’s not all that much when you look at how many people Amazon employs. The decision to raise the minimum wage to $15 is to try and retain existing staff as well as poach new workers from Walmart and Target in the run-up to the busy Christmas period.”

At 3.6 per cent, the unemployment rate in the United States is at its lowest in recent history. So Amazon, like every other employer, is under pressure to hire and retain good staff. But not every company can afford to shell out the estimated $1.6 billion (€1.39 billion) extra each year required by Amazon to raise the minimum wage to $15 per hour and keep it there.

This is a company growing rapidly. Last year it established operations in 50 new countries including Argentina and the Czech Republic. Next year it hopes to set up in another 50, this time in some of the more volatile markets globally, such as Pakistan, Bangladesh and Nigeria.

Unsurprisingly, the Seattle-based company has said on record it hopes Walmart (one of only a small number of real threats to its monopoly of online shopping in the US at least) will follow suit and raise its minimum wage. Walmart remains successful by keeping costs low for the thrifty consumer. But it operates within very tight margins. Raising its current average national minimum wage, $11 per hour, by four bucks would hit the Walton Family hard.

One might be forgiven for believing international expansion and the having the spare cash to raise its employees’ incomes considerably are clear indications that Amazon’s online business model is proving a success, generating more than enough money to keep Bezos in whatever it is billionaires need to be kept in.

Walmart isn’t actually a competitor Bezos concerns himself all that much with though. The vast majority of Amazon’s profits come from its cloud-computing division. “It is Google, Apple and the other big tech players competing in the cloud market that pose the real threat,” the source inside Amazon said.

So while it must retain its digital shop front, the Amazon consumer marketplace is really a marketing tool. For now at least. The cloud is where it’s at. That is until the richest man in the world figures out where to diversify his portfolio next.