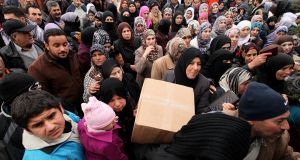 Aid:Tech approached the Irish Red Cross with the technology and partnered with them to deliver aid to Syrian refugees

Support for young mothers in remote areas of Tanzania, aid to Syrian refugees in northern Lebanon and assistance for struggling farmers in Serbia. These are just a few examples of the benefits of the blockchain-based platform created by Irish company Aid:Tech.

The solution offers a secure means to deliver aid and other benefits to people around the world who previously might have had no bank account or legal identity in the form of a social security number of equivalent.

According to Aid:Tech chief operating officer Niall Dennehy, there are 2.4 billion people around the world with no legal identity. This presents huge difficulties in providing them with a range of benefits such as welfare, medical entitlements, remittances, healthcare, aid and peer-to-peer donations.

The Aid:Tech platform allows for the creation of a secure identity for an aid or welfare recipient, which is stored on a blockchain ledger and can’t be subsequently altered or erased. Aid in the form or vouchers or actual cash can be sent via the platform completely securely with an unalterable record of receipt, thus helping address corruption and improve efficiency.

The idea for the solution came from an unfortunate experience. Dennehy’s co-founder Joe Thompson ran the renowned 151-mile Moroccan desert marathon in 2009 to raise money for charity – but the money disappeared. That led to an interest in the security benefits of blockchain technology for such endeavours. “We asked ourselves if we could use it to bring transparency to international aid,” says Dennehy. “We found out that 30 per cent of international aid goes missing each year and we developed a solution which could verify to donors that their money has gone where it was intended.”

They approached the Irish Red Cross with the technology and partnered with them to deliver aid to Syrian refugees – the first time blockchain technology had ever been used for that purpose.

The system is quite simple. The aid or government agency involved can create a digital identity for the individual recipient, which is stored on the Aid:Tech platform. The recipient stores these details in a QR code on their mobile phone or, if they don’t have one, a plastic ID card. To receive aid or other entitlements they simply scan the QR code.

“They go on to the platform and sign up for the identity,” Dennehy explains. “All the usual know your customer and anti-money laundering systems are in place as part of the verification process.”

This gives full end-to end visibility from donor to recipient. Indeed, the company has just created a new app for the Irish Red Cross for that purpose. “Donors will be alerted when their donation has been used so they can be sure it has been used for the purpose intended.”

While the solution was originally created to support the international aid community, there are plans to roll it out to other areas. “It can be used to help people around the world to participate in the digital economy”, says Dennehy. “People will be able to use it to gain access to micropayments services, banks and so on.”

In the world of horse racing every treatment administered to the animal has to conform to strict regulations and must be recorded for subsequent examination by the racing authorities.

Simple clerical errors in record-keeping can result in heavy fines or even bans for unwitting trainers.

Kildare-based Equine Medirecord has taken much of the pain out of this process with its web and phone app solution which enables proper recording of medicines administered to racehorses and other bloodstock.

This is the first application of its type to replace the paper-based system which has become unfit for purpose, according to co-founder Pierce Dargan.

“I came up with the idea when I was in TCD doing a Masters in Management”, he recalls. “As part of the entrepreneurship course I had to think of a business idea in the agri sector for the Alltech Innovation Competition. My family has a racing yard and we’ve been in horses for a long time.

“The medicines and treatments were recorded in this big blue book and entries could be illegible or pages could get damaged. I thought it would be much better if could be done digitally.”

He explains some of the complexities of what’s involved.

“Take equine flu, for example. A horse has to be vaccinated against it at certain times before it is allowed to race. If you don’t have an accurate and verifiable record of those vaccinations it can’t race.”

The idea was only the beginning though. He and co-founder Simon Hillary first had to get approval from the regulator, the Irish Horse Racing Board.

“We asked if they would allow a digital system where the vet or the trainer could record the treatments on their phones. It took two years, but they agreed.”

The pair then set about developing the web platform and phone app.

“It does all the veterinary regulatory compliance for a racing yard in one place and we have made it as simple as possible to use. Up until now trainers couldn’t check if the book was being filled out correctly by an assistant trainer or another person if they were not in the yard themselves. They were getting fined and banned for other people’s mistakes.”

The platform, which was launched in Ireland earlier this year with the backing of leading trainers John Oxx, Noel Meade and Colin Bowe, rules out most common errors.

“If you add a new treatment to a field the software makes you complete all the details. We also have a database of permitted equine drugs which reduces the chance of spelling errors and so on.”

Market response has been very good.

“The uptake here in Ireland has been very strong”, says Dargan.

“We launched in the UK in August and we are very pleased with the response there as well. We are looking at extending into other equestrian sports as well and we have already had enquiries in relation to harness racing in Europe. ”

The advent of GDPR and the EU PSD2 open banking directive could hardly have been more timely for Galway-based Priviti. Established in 2015 by Gerard Barry, who previously founded Fintrax and sold it in a multi-million dollar deal to Exponent Private Equity 2012, the company has developed a patented solution to manage consent for data-sharing and transactions simply and securely in real time.

The company was initially targeting transactions such as consent for passport details or health record-sharing over mobile phones but the market has transformed in a very short period of time. “Two tsunamis came at it in the form of GDPR and open banking,” says chief executive Dave Cunningham. “They brought a whole new raft of use cases with them.”

Public disquiet over data-sharing prompted by a number of factors, including the Facebook Cambridge Analytica scandal, was also timely. “When he testified before the US Congress Mark Zuckerberg didn’t have the systems in place to tell him what developers were doing with his customers’ data,” says Cunningham. “He didn’t know what was going on. People were comfortable up until then giving blanket consent based on a 47-page terms and conditions document as long as they got a free service.”

But attitudes and regulatory realities have changed. “With GDPR you have to be sure that people are fully informed. If a bank customer is changing from a tracker to a variable rate mortgage they have to be fully informed of what is happening. They also have to have a record of their informed consent. That’s where our system comes into its own. Blanket consent doesn’t cut it anymore.”

The open banking directive is also creating demand for the system. Banks in Europe now have to open their systems to third parties to allow their customers avail of an expanded range of services. Again, this requires robust systems for consent management on a case by case basis. The Priviti solution allows customers to both grant and revoke consent for data-sharing securely, and no sensitive credentials are ever shared, stored or monetised.

Head of business development Mia Iwama Hastings explains that the Priviti solution can help banks and others regain the trust they need if they are to maximise the value of the data they hold. While data may well be the new oil, trust and consent are crucial to keep it flowing.

“Companies that can’t establish trust won’t survive, and in order to establish and maintain trust companies need to enable power consumers to grant consent and to revoke it at any time. They also need to be able to prove this, and keep audit trails for regulatory compliance.”

The solution is currently being rolled out on a trial basis in a major retail bank in the US, as well as with a number of other significant customers. “It’s a really exciting time for us,” she adds. “We recently announced that we have joined Temenos’ MarketPlace, a platform which connects global banks with the best fintech solutions, and have launched in Sydney as Australia prepares for Open Banking and the Consumer Data Right.”