To be – or not to be – an enhanced human 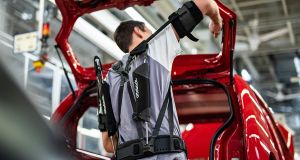 Should there be any ethical or legal boundaries to technologies that enhance humans? I pondered this last week as I read an online article about the recent trials of upper-body “exoskeletons” by production line staff at Volkswagen and at Chrysler-Fiat. These lightweight wearable frames greatly reduce the physical strain of repetitive overhead assembly work, and will be an important industrial enhancement as workforces age.

We tend to think of medical advancement in terms of better cures for diseases and recovery from injury. Enhancement however goes beyond therapy, and extends us in ways that some may argue are unnatural. Some human enhancements are of course also pre-emptive therapeutic interventions. Vaccination is both an enhancement of our immune system, and a therapeutic intervention. However, in cases where there is little preventative justification, what degree of enhancement is acceptable?

We drink coffee expecting our work performance to improve. We accept non-elective operations, breast implants, orthodontic improvements and other interventions which improve our perception of ourselves. We generally accept such enhancements with little question. However devices and drugs that improve athletic performance can lead us to question their legitimacy.

Laser eye surgery is an accepted therapeutic intervention for poor vision. But so are glasses and contact lenses. In general, do we accept enhancements only when they do not offer an advantage over “normal” humans? What if a new contact-lens technology emerges that enables a five times improvement in normal human sight, including at night? Would such contact lenses be ethically acceptable, since they could always be removed so as to reverse their advantage over “normal” sight? But what then if a new laser technology emerges which enables a permanent irreversible five times improvement in normal human sight?

Such debates are becoming urgent because of the global interest in human enhancement for military advantage. Advanced therapeutics and medical devices improve the management of illness and injury, including reducing pain. Military personnel may consequently be able to more quickly return to the battlefield. Some therapeutic interventions enable composure in highly stressful conditions, such as arise in combat, and thus enable military objectives more likely to be achieved. Research into sensors that are worn on the body, and potentially even as implants within the body, can identify and alert combat military to potential threats on the battlefield – vision enhancement by factors of five or more, and night vision, are examples.

What if the mind can extend outside the physical body? Various projects worldwide have demonstrated how prosthetic limbs can now be directly controlled by thought alone, with surgically implanted sensors. In turn, this then enables remote prosthetics: a robot device being directly controlled by thought alone, at a different location and using internet technologies to convey thought commands and sensory feedback. Next after thought-controlled prosthetic limbs, we may soon be able to directly enhance a human brain with implants for more extensive and reliable memory, much faster analytic capability, and many more sensory inputs.

Should serving military personnel be given a free choice in whether to use technologies – whether drugs or medical devices – which enhance their bodies and minds for combat? In fact, do serving military personnel really ever have a free choice in such decisions, particularly in battle situations? Are technologies that offer long lasting or even permanent enhancement in military personnel ethically acceptable? In particular, what could happen when an enhanced soldier is discharged and returns to normal society, with an embedded technology advantage over civilian peers?

When a human becomes enhanced, does their personality change? We already observe the general increase in happiness that arises from having successful laser eye surgery, orthodontic treatment, or non-elective plastic surgery or body implants. Would a soldier with gene therapy to remain calm in highly stressful situations, with embedded sensors to deliver acute hearing and eyesight, as well as sensory inputs for temperature, air pressure, and radiation detection, remain with the same personality?

The advancement of human enhancement technologies is leading to deep strategic debate among some military think tanks. The widespread investment in enhancement research leaves little doubt that different jurisdictions worldwide can envisage the direct national strategic opportunity, and threat, of enhanced military personnel in combat situations. Such an opportunity, and such a combative threat, may pre-empt ethical concerns. Armed forces may have no choice but to develop such technologies, and rapidly, because other nations are already doing so.

Technology advancements driven by military considerations have often led to spin-off benefits to civilian society. The development of the aviation industry, the space race of the 1960s-90s, and of course the DARPA initiative for what became the internet are some examples. Human enhancement, beyond what is needed merely for therapeutic intervention – to enable a more resilient, more alert, more analytical and more capable military force – is now a highly active focus of applied research and funding by major governments. No doubt there will also be direct benefits in due course to society at large in terms of better quality of life. However for the first time in the history of our species, we are being challenged on what it is to be – or to remain – a human.