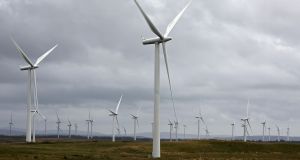 While the target for electricity is to have 40 per cent generated by renewable sources by 2020, the grid often runs with 65 per cent from those sources. Photograph: Simon Dawson/Bloomberg via Getty Images

While the climate change debate in Ireland may be dominated by this country’s poor performance in meeting targets set for it by EU and international agreements, this disguises the fact that we are in fact global leaders when it comes to incorporating renewables on the electricity grid.

While the target for electricity is to have 40 per cent generated by renewable sources by 2020, the grid often runs with 65 per cent from those sources. “No one else in the world is achieving that,” says Jon O’Sullivan, innovation manager with EirGrid. “And we are now looking at increasing that to 75 per cent.”

The difficulties in terms of variability and reliability presented by renewable energy sources are well documented. The wind doesn’t blow all the time and the sunshine is certainly not guaranteed in Ireland. This means the network has to have reserve capacity available to it should supply from renewable sources drop.

But that is not the only problem. The other problem is resilience. Most people are blissfully unaware of the fact that there are actually two components to the power generated by conventional electricity stations. The first is the electrical energy we are familiar with, the second is known as the reactive component. In very crude terms, this is the bit that drives it through the wires of the transmission network.

O’Sullivan describes it as the glue that holds the network together.

The problem with renewable energy is that it doesn’t contain that component. Because it is generated using electronic rather than electro-magnetic generation, it is fundamentally different to conventional power.

Mixing the two is not an issue at low levels as the system still has enough reactive power to cope. When you get to levels of 65 per cent and above, however, you start to run into real problems. This means that a number of renewable energy suppliers cannot sell to the grid as their technologies are deemed unproven or not to meet current standards and compliance requirements.

EirGrid has responded by developing a novel and efficient trial process for renewable energy suppliers to qualify to supply services to the grid. The qualification trials process ran for six months in 2017 and focused on three key areas – the provision of reserve capacity which is available instantly should renewable or other sources drop out, the provision of what is known as ramping power which can be called up in a matter of hours, and services which address the reactive power issue.

The process has seen a number of new technologies demonstrate their ability to provide services and contribute to the security of the system, deliver consumer value for money, and facilitate the reduction in carbon emissions and further deployment of renewable technologies.

This will facilitate the growth from 65 per cent to 75 per cent renewables capacity on the grid by 2020. “There isn’t another power system in the world that can do that,” says O’Sullivan.