The ‘Stop Bezos’ Bill, the tech firms racing to Wall Street and the sports car made of Lego

Planet Business: This week’s round-up of the strange and strangely sensible 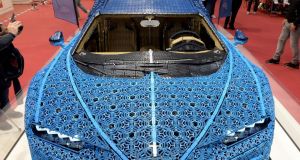 Bugatti bricks: A Chiron two-seater sports car made of Lego as all sports cars should be. Photograph: Eric Piermont / AFP

1 Minimum number of women that publicly traded companies headquartered in California must have on their board of directors by the end of 2019, under a new law enacted on Sunday by governor Jerry Brown.

$100,000. The fine that will apply if companies fail to comply with the new law, while multiple violations will result in penalties of up to $300,000. “Recent events in Washington DC – and beyond – make it crystal clear that many are not getting the message,” said Brown. What could he be referring to?

Image of the week: Lego getaround

The Paris Motor Show may be a city of gleaming silver robo-cars, but can any of them compete with the ingenuity of this full-sized Bugatti Chiron made entirely of Lego? Constructed with more than a million Lego Technic parts, the end result isn’t a mere replica of the non-brick Bugatti Chiron sports car, it is technically driveable (it has no accelerator, but it does have a brake).

Yes, after taking 13,000 hours to develop and build, the battery-powered Lego version can go as fast as about 12 miles per hour – just the sort of speeds sports car owners adore. Still, given Bugatti is a French company founded by an Italian and now part of a German group (Volkswagen), and Lego is famously a Danish export, this pile of bricks is a testament to 21st century European co-operation. Why does Britain want to leave the EU again?

After sustained criticism of the working conditions in its empire of warehouses, Amazon announced this week it was increasing the minimum wage for its US and British workers to $15 per hour and £9.50 (€8.25) (or £10.50 in the London area). The move follows both a series of Amazon strikes in Spain, Germany and Poland and a Bill proposed in September by former US Democratic presidential candidate and senator Bernie Sanders that went by the unsubtle title Stop Bad Employers by Zeroing Out Subsidies, aka the Stop Bezos Bill.

Legislatively, it has gone nowhere, but this political stroke may have successfully contributed to Amazon’s concession to decency. The aim is to lessen the “absurd” situation whereby vast swathes of Amazon workers don’t earn enough to live, so governments end up making up the difference – effectively subsidising founder Jeff Bezos, already the richest man in the world.

Getting to know: Adam Mosseri

Adam Mosseri is the new man in charge of ruining Instagram. Well, he might not ruin it, but he will be responsible for, ahem, evolving it from its current iteration, which has the distinction of being a social media app that people still love.

Mosseri is a senior Facebook executive who was previously responsible for its core “news feed”, which meant he oversaw everything from the introduction of new reaction emoji to join the “like”, to the platform’s top tips on how to spot fake news. Earlier this year Mosseri became vice-president of product for Facebook-owned Instagram. Now, after the resignation of Instagram founders Kevin Systrom and Mike Krieger from the corporate fold, Mosseri has officially been installed by big boss Mark Zuckerberg as head of Instagram.

And who knows? Maybe this is the one time that a platform’s aggressive growth strategy doesn’t alienate the people who use it.

We’re still only a few days into “Q4”, but already it has been a frenzied 2018 for tech companies going down the initial public offering (IPO) path, enjoying some bell ringing at the New York Stock Exchange and, perhaps more crucially, a big pay day into the bargain. Who’s been at it?

2 Spotify: The Swedish company chose a direct listing rather than an IPO, but the music streaming service nevertheless went public in April and its share price has risen steadily since.

3 Survey Monkey: The software firm’s shares surged 40 per cent after last week’s IPO. The company has never made a profit, but since when has that ever stopped Silicon Valley?

4 Dropbox: Some people find it hard to get excited about cloud storage, but investors managed it in March when Dropbox became the most successful tech IPO since Snap.

5 Tencent Music: It hasn’t floated yet, but this week the Spotify-backed and actually profitable streaming service filed for an IPO, becoming the latest Chinese company to circle Wall Street.