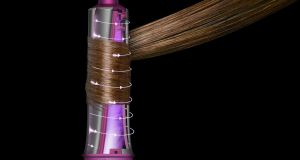 The new device is the result of six years of development and €27.5 million in investment.

Dyson has taken another step into the personal care market with a second beauty device, the Airwrap styler.

The company, which built its business on bagless vacuum cleaners, has turned its attention to other markets in recent years, broadening out its digital motor range for use in everything from air purifiers and humidifiers to hairdryers and hand dryers.

Dyson launched the Supersonic hair dryer in 2016, powered by a miniature digital motor and sensors to help control temperature to reduce damage to hair. The Airwrap styler uses similar technology to curl, wave or blow-dry hair.

The new device is the result of six years of development, £24 million (€27.5 million) in investment and 642 prototypes. The company was granted 103 patents and has 170 pending patent applications for the styler.

“We have been obsessively manipulating airflow for more than 25 years. Our expertise in aerodynamics forms the principle in which Dyson’s core technology is founded upon,” said James Dyson. “Harnessing the power of Dyson’s digital motor we have engineered a truly unique styling tool preventing the need for extreme heat damage. I’m very proud of what the engineers have achieved.”

The device uses intelligent heat control through a glass bead thermistor that measures temperature up to 40 times a second, and regulating it accordingly to ensure hair is not exposed to extreme heat, and a switching mechanism that keeps airflow directed according to the tension in the brush.

Dyson is selling three different packages, with specific attachments according to hair type and desired look - one for flat hair, a second that is designed for frizz-prone hair and a package that covers all hair types. The device, like the Supersonic hairdryer before it, will not come cheap though, with prices starting at €449.

The company has invested heavily in its digital motors over the years, developing the motors to make them perform as well as those in their full-size vacuum cleaners. Earlier this year Dyson announced it was going cord free in its traditional Vacuum cleaner market, and would no longer develop its corded range.