Equine Medirecord a leader in the race to simplify data management

One of three Fintech and IT finalists in the 2018 Innovation Awards, the Kildare-based firm’s web platform and phone app is backed by leading trainers 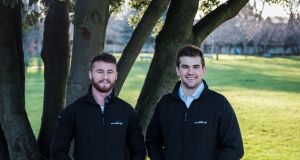 In the world of horse racing every treatment administered to the animal has to conform to strict regulations and must be recorded for subsequent examination by the racing authorities.

Simple clerical errors in record-keeping can result in heavy fines or even bans for unwitting trainers.

Kildare-based Equine Medirecord has taken much of the pain out of this process with its web and phone app solution which enables proper recording of medicines administered to racehorses and other bloodstock.

This is the first application of its type to replace the paper-based system which has become unfit for purpose, according to co-founder Pierce Dargan.

“I came up with the idea when I was in TCD doing a Masters in Management”, he recalls. “As part of the entrepreneurship course I had to think of a business idea in the agri sector for the Alltech Innovation Competition. My family has a racing yard and we’ve been in horses for a long time.

“The medicines and treatments were recorded in this big blue book and entries could be illegible or pages could get damaged. I thought it would be much better if could be done digitally.”

He explains some of the complexities of what’s involved.

“Take equine flu, for example. A horse has to be vaccinated against it at certain times before it is allowed to race. If you don’t have an accurate and verifiable record of those vaccinations it can’t race.”

The idea was only the beginning though. He and co-founder Simon Hillary first had to get approval from the regulator, the Irish Horse Racing Board.

“We asked if they would allow a digital system where the vet or the trainer could record the treatments on their phones. It took two years, but they agreed.”

The pair then set about developing the web platform and phone app.

“It does all the veterinary regulatory compliance for a racing yard in one place and we have made it as simple as possible to use. Up until now trainers couldn’t check if the book was being filled out correctly by an assistant trainer or another person if they were not in the yard themselves. They were getting fined and banned for other people’s mistakes.”

The platform, which was launched in Ireland earlier this year with the backing of leading trainers John Oxx, Noel Meade and Colin Bowe, rules out most common errors.

“If you add a new treatment to a field the software makes you complete all the details. We also have a database of permitted equine drugs which reduces the chance of spelling errors and so on.”

Market response has been very good.

“The uptake here in Ireland has been very strong”, says Dargan.

“We launched in the UK in August and we are very pleased with the response there as well. We are looking at extending into other equestrian sports as well and we have already had enquiries in relation to harness racing in Europe. ”