A $1bn spell-checker is no match for a skilled proofreader 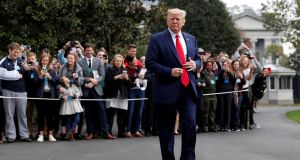 ‘Referring to his recent visit to the UK last July, Donald Trump noted that he had met with the Prince of “Whales” (sic), among other dignitaries.’ File photograph: Tom Brenner/Reuters

“Covfefe” [sic] has become an internet meme, Dadaist in its obscurity and nonsense. US president Donald Trump used it in an apparently incomplete tweet in May 2017, while referring to media coverage of his activities. Some – such as the imageboard website 4chan – have opined that the president has become a meme himself, since he seems to expressively tweet his mental state.

A press release from the White House administration earlier that month had affirmed that the goals of the president’s trip to Israel were to promote a “lasting peach” (sic) in the region. Referring to his recent visit to the UK last July, Trump noted that he had met with the Prince of “Whales” (sic), among other dignitaries. Just last week, he tweeted that his secretary of defence “Mark Esperanto” (sic) had reported favourably on the fragile ceasefire between Turkey and the Syrian Kurds. His name is actually Mark Esper.

Copywriting and proofreading are valuable skills, and I am grateful to my colleagues at The Irish Times who have saved my embarrassment on several occasions. I have had to use the Latin adverb “sic”, denoting “thus it was written”, to mark the errors above. Otherwise there is a strong likelihood that these colleagues might have amended the general intention of my paragraph above.

Auto-correcting spelling checkers seek to replace our mis-keyed words, trying to remedy the spelling errors we make. They often do so surreptitiously. It is all too easy to send a text, message or email in which a spelling corrector has quietly mangled our intended meaning. “Esperanto” rather than “Esper”, “Whales” rather than “Wales” and “peach” rather than “peace” are conceivably all the consequences of an over-eager automated spell-checker, unchecked by human supervision. Raw spell-checkers simply examine words in isolation, without understanding their context in a sentence or paragraph, and often result in strange errors.

Many text editors and word processors offer facilities which improve on the simple checking of isolated words, by trying to interpret the wider context – the Prince of Wales, rather than of cetaceans. Gmail, as an example, goes even further. It can analyse an incoming email and then suggest rote responses to partially completed replies, or even offer full and cliched responses – “thanks so much”, “yes and yes”, “can’t tomorrow but maybe next week?”.

Nevertheless, I was slightly incredulous to this week learn that an automated checker and proofreader had just raised a further $90 million (€81.2 million), bringing its venture capital raised to date to more than $200 million. It has now achieved a value of $1 billion, and thus “unicorn” status.

Grammarly was founded by three Ukrainians in 2009, and is based in San Francisco. Its core engine is written in the Common Lisp programming language. It analyses English language sentences to identify potential punctuation, spelling, and grammar mistakes. It includes a thesaurus, and so can suggest word replacements which more appropriately match the flow of a sentence or paragraph. Possible plagiarism can be detected as it compares a candidate text with others which it has found on the internet. It also allows a writing style to be selected, so its machine-generated suggestions and advice can reflect casual, technical, creative, business or academic content.

Proofreading and copywriting are centuries-old skills. Are these roles now likely to be replaced by such automated tools?

Proofreaders are specialists in a natural language, such as English, and can work in many contexts from newspapers and media to literature and academic papers. Their work may include checking that captions are under the correct illustration, that chapter titles match their content, and that layout and style are consistent. Copywriters are specialist writers, highly knowledgeable in particular technical or business domains. They proactively engage at the beginning of a creative process, whilst a proofreader provides a final quality control measure before content is finally published or printed.

Automated tools can no doubt watch over our writing, whether just casually for social media or more formal literary creations. They can helpfully coach those for whom English is not their first language, and guide those who occasionally struggle to succinctly express themselves in writing. One obvious danger is that human writing standards paradoxically fall: rather than reducing the mistakes which students make and thus earning the praise of their mentors, instead students become tempted to just use automated tools to routinely correct whatever mistakes they may make. Another danger is that writing becomes bland and dull, as many contributors use tools to produce pre-determined rule-based automated style: writers such as Samuel Beckett, Roddy Doyle and Flann O’Brien break rules in their wonderful writing.

Perhaps automated tools find particular value in situations in which time is precious: whether it be the production of content in the deadline-driven news and media industry, or the hard-pressed president exigently reaching out to his followers during the weighty affairs of state.

I, however, believe that tools such as Grammarly need considerable improvement before they could be substitutes for the professional and skilled artisans who ensure quality in the written word. To me, a $1 billion valuation seems very high for a software tool of moderate sophistication which, albeit useful on occasion, nevertheless may be susceptible to more intelligent algorithms likely to become available elsewhere.