Data gold rush: 'We could generate the data equivalent of 15 Facebooks every day' 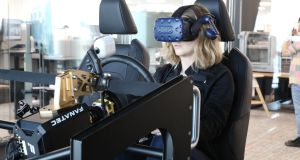 Toyota could generate the data equivalent of 15 Facebooks every day if it tapped into its global fleet of vehicles. And it’s the ability to process this vast amount of data using deep learning, that will form the basis not only for driverless cars, but also a multitude of new revenue streams for carmakers.

You can see, then, why they are busy redefining themselves as mobility services companies. The way Toyota sees it, this is the start of the third reinvention of a company that started as a maker of looms for the clothing trade.

Dr James Kuffner is chief executive of the Japanese company’s TRI-AD operation, set up to deliver practical applications of the latest research across all formats of mobility.

“Think about it: Toyota makes 10 million cars a year. Let’s say every car lasts about 10 years. And every car drives about 10,000km a year.”

The data flow advantage to Toyota is obvious. “Some people say that if you were to log all the data [from these cars] with the accuracy we’re logging for our tests cars, you would generate 15 Facebooks every day. That’s a huge amount of data. But is all that data useful? That’s the interesting part. We do believe you have to capture the long tail of data eventually, but it’s going to take time.

“I believe that data-driven approaches are the answer, because they are scalable. It also means you can capture human driving behaviour at a very fine-grain level and that means if you have enough data to potentially model statistically how the average Tokyo driver drives, and that driving behaviour could be different from someone in Rome, or in London, or Mumbai. But because you have a data-driven approach it’s scalable, so you can make predictions.

“To me, when you talk about data it’s all about using it predictively.”

That ability to predict potential outcomes will be key to avoiding crashes. Kuffner says being able to predict what humans might do next is one where human intelligence and human knowledge has a huge advantage. “Even if you have really good sensors, the ability to predict behaviour is why human-driven traffic actually works.

“If a driver is behaving unpredictably, that is really unsafe, driving too fast or erratically. That’s because other humans drivers cannot predict well, what they will do next.

“So, the good news is that with deep learning, because it operates by processing large amounts of data, we now have a scalable solution. Ten years ago, software engineers had to manually encode the logic of how the car behaves, but now we can gather lots of data. And hopefully, if that situation is not so rare, we will be able to record and learn from it and then retrain the algorithms so that in the future, like an experienced human driver, we now have an experienced AI system.

“That, to me, I think is the true power of these data driven approaches is how we can potentially scale, but it’s a really, really hard problem. And I should be very clear, when you talk about Level Five fully automated driving, driving on any road in any weather under any traffic condition, nobody’s even close [to perfecting this].

“But if you start to restrict it to good weather, light traffic, low speed, you know, simple road situations, yeah, we can deploy that today.”

Then the question is, as the systems get better, how do you expand it and make it more skilful?

If you’re driving in heavy snow and you have the wipers going and trying to see, at some point the car will be able to drive better. But I think we’re not at that point

In relation to bad weather conditions, will it always fall to the driver to take control? “The reality is, is that as I mentioned, automated driving is going to be a gradual process where as a technology improves will be able to expand the design domain to account for all kinds of extreme weather events. But, when it becomes unsafe for a human driver to drive, I think it’s also unsafe for the automated trade systems drive as well.

“If it’s really zero visibility, a human driver should not be on the road, and also our car should not as well even though our car can have sensors that can see through fog like radar, things like that. So, we will over-engineer the system. But I think it’ll be a gradual process before we will be able to say yes we can handle any kinds of extreme weather.

“Actually think about airline auto pilots. If you in the early days, like human pilots could actually fly just by looking at the instruments, even if they have zero visibility. But the reality is our computer systems now for flying airlines are much safer than a human pilot. Because if you have zero visibility, you absolutely want that computer in control.

“Similarly, if you’re driving in heavy snow and you have the wipers going and trying to see, at some point the car will be able to drive actually better. But I think we’re not at that point.”

Kuffner’s belief that data will open the door to a world of driverless vehicles, is echoed by Ronan Carey, regional sales director of Dell Technologies Ireland.

He says it’s hard to overestimate the scale of the opportunity that awaits the automotive industry.

“Autonomous and connected vehicles, as well as mobility services, will be key drivers of double-, even triple-, digit revenue growth over the next decade. This will lead to data deluge – around 1 zettabyte of data [about 1 trillion gigabytes] across the entire industry – which is set to unleash unprecedented transformation and much disruption for vehicle manufacturers.”

According to a new report from Frost & Sullivan, commissioned by Dell Technologies, the shift to a data-centric, value-creation business model will require vehicle manufacturers to utilise vast amounts of data to inform engineering, vehicle design, and marketing. For an industry that today only monetises around 300MB of vehicle data, this is an entirely new paradigm to work within.”

Kuffner arrives at our meeting on one of Toyota’s i-Walks, their version of a Segway-like mobility device. Asked why he thinks these will succeed in winning public support, where Segway has largely failed to capture the private buyer’s interest he says: “So we also have Segways [in the office]. I think we’re open to lots of different technologies. But I think the reality is that if you look at cities around the world, I don’t know if you’ve been to Tel Aviv. I don’t know if you’ve been to San Jose, California recently, everybody’s riding on e-scooters and there are different types of personal mobility devices. The reality is our urban centres need options for people.

“Devices like this are low cost, zero emissions, so we’re experimenting and we’re willing to embrace new technology for new forms of mobility. We work with many companies in the world, many different suppliers, and the question is, how much technology do we build ourselves?

“What’s our core? And what do our customers expect from a Toyota product? But we’re very open when it comes to the environment, safety, traffic, things in the social good. We’ve open-sourced all 6,000 of our fuel cell patents because it’s the right thing to do for the planet. And we will do the same with safety. So I think for us, we want to bring the technology as fast as we can. And if that means partnership, we will do that. There’s over four million people dying in the world every year due to traffic accidents. We know we can do better if we have better technology, so it needs to come faster. That’s the reason we’re investing.”

According to the Frost report, by 2030, 50 per cent of a vehicle’s value will come from electronics and software. The days of making your money by pressing metal are over.

As Kuffner and Carey point out, the challenges then will be in harnessing and managing the mountain of data.

For the big players such as Toyota that means putting in the investment now, and luring the talented programmers and electronic engineers to the auto sector.That’s why Toyota is investing so heavily in research at present. And it’s why they have invested $2.8 billion (€2.5 billion) in Kuffner’s TRI-AD division.

There’s a data gold rush under way in the auto sector, an whoever mines it best could give themselves an insurmountable lead. The race is on.