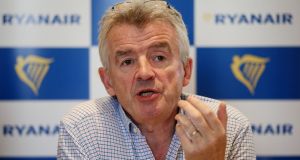 Ryanair chief executive Michael O’Leary has committed to the airline for another five years but will take on a new group role as part of a restructuring of its operations. Photograph: Jonathan Brady/PA Wire

Wexford accountant Alan Hynes has had his membership of Chartered Accountants Ireland revoked after a disciplinary appeals tribunal found against him. Peter Hamilton was there to hear the verdict.

Insurance software and consultancy provider Sedgwick intends to add 250 staff to its workforce here as part of its ambition to have an international services hub in Dublin. Peter Hamilton has the details.

Hong Kong’s special economic and trade representative to the EU, Shirley Lam, has insisted concerns that China is encroaching on the former British colony’s freedoms are “overdone”, as the semi-autonomous region finds itself caught in the middle of the Sino-US trade war. Joe Brennan reports.

Ryanair chief executive Michael O’Leary has committed to another five years at the airline but will take on a new group role, with the heads of four subsidiaries reporting to him as part of major restructuring of the carrier’s structure. In an excellent analysis piece, Barry O’Halloran looks at whether this is succession planning by another name.

In her weekly media and marketing column, Laura Slattery takes a look at Disney’s plans to launch a streaming service in competition with Netflix, and how consumers might soon be paying multiple subscriptions for access to the many services being planned.