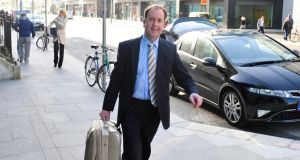 Wexford accountant Alan Hynes has had his membership of Chartered Accountants Ireland (CAI) revoked after a disciplinary appeals tribunal found against him.

Mr Hynes failed to turn up last Friday to a court-ordered appeal, which was adjourned until Monday morning, when he again failed to appear.

The original disciplinary action related to complaints from investors who lost €18 million in property ventures he controlled. A Chartered Accountants’ Regulatory Board (Carb) disciplinary tribunal excluded Mr Hynes in 2015 after finding he had breached codes of ethics and principles meant to guide the profession in integrity, competence and truthfulness.

Mr Hynes subsequently got his membership restored after a High Court judicial review found in his favour on the grounds that he had been refused fair process.

But the CAI’s tribunal, of which senior counsel Anthony Aston was chairman, dismissed the appeal on foot of an application by junior counsel Ronan Kennedy, Carb’s case presenter.

Mr Kennedy argued that Mr Hynes had long been aware that the appeal was listed for February 1st. “It was open to him to come before you or indeed ask you to sit to hear an application for adjournment at any stage. He didn’t do so,” Mr Kennedy said.

“I would ask you to have regard for the fact that the subject matter of this appeal now dates back approximately a decade and a number of people who were affected were people in their advancing years, people who were pension investors and I ask rhetorically, is it appropriate, is it fair, that these proceedings are allowed to drag on when one considers that background?”

Mr Hynes had been contacted last Friday by the board’s registrar, Margaret Penny, to advise him of the fact the appeal was being adjourned.

There followed a number of emails to the tribunal on behalf of Mr Hynes, requesting that his costs connected with his High Court judicial review be paid.

The tribunal heard last week that a series of attempts to pay Mr Hynes’s costs had been made, but that taxation requests had not been dealt with by him.

Commenting on the correspondence sent over the weekend, Mr Kennedy said the only inference he could draw from the emails was that they were “an attempt to frustrate the [CAI’s] appeals process”.

Mr Hynes had suggested he wasn’t in a position to appoint a legal team to deal with the appeal because of the delay in paying the costs associated with the High Court action.

“In my submission, this is a delay entirely of his own making,” Mr Kennedy said, adding that “there is no evidence before the tribunal that he has even engaged with a firm of solicitors or counsel requesting that they represent him before this tribunal”.

After retiring to consider the evidence, Mr Aston returned to set out nine grounds on which they were dismissing the appeal, noting the “seriousness of the matter” for Mr Hynes and the significant consequences for his reputation.

Following the decision, Mr Kennedy made an application that a contribution towards costs relating to the tribunal be made by Mr Hynes. A hearing on that matter has been scheduled for February 8th and Mr Hynes has been invited to attend.