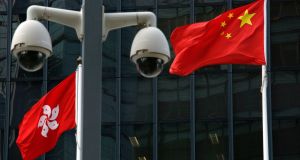 Hong Kong’s introduction of a controversial Bill that would make disrespecting the Chinese national anthem a crime has heightened fears about freedom of expression in the territory. Photograph: Bobby Yip/Reuters

Hong Kong’s special economic and trade representative to the European Union, Shirley Lam, has insisted concerns that China is encroaching on the former British colony’s freedoms are “overdone”, as the semi-autonomous region finds itself caught in the middle of the Sino-US trade war.

“We are operating under the principle of ‘one country, two systems’, both of which are equally important,” Ms Lam said in an interview with The Irish Times in Dublin, ahead of the start of the Chinese New Year on Tuesday. “We are part of China, but we retain our own capitalist system, our own independent judicial system and also our way of life.”

Almost 22 years since the UK returned control of the region to Beijing, Hong Kong’s introduction last month of a controversial Bill that would make disrespecting the Chinese national anthem a crime has heightened fears about freedom of expression in the territory.

Last November, the US-China Economic and Security Review Commission, a body that advises the US Congress, said China’s creeping influence on Hong Kong’s political system could weaken its standing as a global business hub and affect exports of US technology to the region. Hong Kong’s government has rejected the report.

Meanwhile, a Standard Chartered business index published last week showed that sentiment among SMEs in Hong Kong, an open services-oriented economy like Ireland, has fallen to its lowest level in nearly three years, amid concerns about global growth and Sino-US trade tensions.

Chinese economic growth slowed to 6.6 per cent last year, the weakest pace since 1990.

Ms Lam expressed confidence that the US and China would reach a compromise in the near term, though some Hong Kong companies with manufacturing plants in China are looking at moving facilities to other parts of southeast Asia. She said the Chinese growth rate was “sustainable” around current levels, particularly as domestic consumption is growing there.

Meanwhile, Hong Kong’s economy should also be boosted by so-called Greater Bay Area development plan to turn the city, Macau and nine cities in the neighbouring Guangdong providence of China into an innovation and technology hub to rival Silicon Valley, she said.

1 Owner of Dundrum Town Centre to sell prized assets
2 More than 40% of help-to-buy recipients already had deposit
3 Elderly parents living in property you own will save you on capital gains tax
4 Most workers now expect ability to work from home part-time
5 Help-to-Buy bonus; a taste for working from home; and two landmark deals
6 Stocktake: Is the shoeshine indicator flashing red for stocks?
7 Can a first-time buyer get relief on a buy-to-let home?
8 Law governing construction pay rates remains pending State appeal
9 Ryanair fails to win injunction against Skyscanner
10 Office rentals in Dublin halved in opening six months of year due to Covid-19
Real news has value SUBSCRIBE