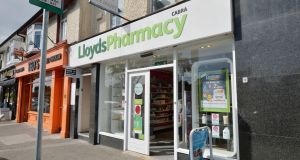 Workers at Lloyds pharmacies across the Republic will strike for two hours on Friday. Photograph: Alan Betson/The Irish Times

More than 200 workers across 34 Lloyds Pharmacy outlets in the Republic will strike for two hours on Friday in a dispute over pay, zero-hour contracts and annual leave entitlements.

The strike follows similar action on June 13th, when up to 200 workers at 29 outlets went on strike for one hour.

In a statement on Thursday, Lloyds said: “disruption was curtailed last week, with only four stores closing for the one-hour period of the strike. We are confident that despite tomorrow’s action, stores will be open and patients’ needs will be met.”

As well as striking over pay, the workers are seeking the introduction of a sick-pay scheme, security of hours and improvements in annual leave. Trade union Mandate says the strike comes as Lloyds refuses to negotiate on the issues.

“The Labour Court issued a recommendation stating that the company should engage with their workers designated representatives, Mandate Trade Union, but to date the company has refused to negotiate. This has left the workers with no alternative other than industrial action,” the union said.

Lloyds described Mandate’s decision to strike as “disappointing, not least given the progress made over the past month with the independent body which represents our team, the Colleague Representative Committee”.

Lloyds said it had agreed increased pay and introduced a new sick-pay scheme. “Contrary to misleading information, we do not have, and never had, zero-hour contracts,” it added.

Mr Gibney said strike action would continue until the pharmacy chain sits down with the union. He said the action would escalate to three hours next week, and would gradually increase across Lloyds stores.

Mr Gibney claimed workers in Lloyds are paid on average 30 per cent less than their colleagues in Boots. “Our hope is that the company will just see sense,” he said.

Lloyds is one of the Republic’s largest pharmacy chains with 88 outlets across the country.

It is controlled by McKesson Europe – formerly Celesio AG – which also operates the Lloyds brand in the UK and is ultimately controlled by US-based fortune 500 company McKesson Corporation.

While most of Friday’s strike action will take place in Dublin, some stores elsewhere will be affected.

“We wish to assure patients once more that a full plan is in place to minimise its impact...we are confident that despite tomorrow’s action, stores will be open and patients’ needs will be met,” Lloyds said.