Bayer is cleared by DoJ for $66bn Monsanto takeover

US regulators demand $9bn in divestments to approve deal 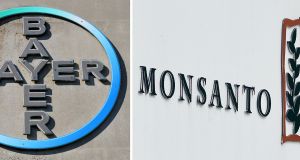 Bayer cleared the final major hurdle to its $66bn takeover of Monsanto on Tuesday as US antitrust authorities approved the deal, requiring $9bn worth of divestments

Bayer cleared the final major hurdle to its $66 billion (€57 billion) takeover of Monsanto on Tuesday as US antitrust authorities approved the deal, requiring $9 billion worth of divestments.

The Department of Justice gave the German pharmaceuticals and chemicals group approval to buy its US rival after a two-year process that has drawn scrutiny from competition authorities around the world.

Makan Delrahim, assistant attorney general, said the sale of $9 billion of assets to BASF, the German chemicals firm, is “the largest merger divestiture ever required by the United States”.

Among the divestitures are businesses in which Bayer and Monsanto compete directly, including Bayer’s cotton, canola, soyabean and vegetable seed business, along with its Liberty herbicide business, which goes head-to-head with Monsanto’s Roundup.

The deal also calls for the surrender of some intellectual property and “pipeline” research and development projects.

“Without the agreed-to divestitures, the proposed merger would likely result in higher prices, lower quality and fewer choices across a wide array of seed and crop protection products”, the Department of Justice said.

Earlier this year, the European Commission also gave the two businesses the green light. The Brussels-based antitrust regulator signed off on the Monsanto deal in March, after it concluded that “there will be effective competition and innovation in seeds, pesticides and digital agriculture after this merger”.

Bayer at the time committed to selling key parts of its seeds business and other units for a total consideration of €7.6 billion to German chemicals group BASF. Bayer said on Tuesday that it expected to win regulatory approval from antitrust authorities in Canada and Mexico “in the coming days”.

US officials said the settlement with Bayer was helped by the decision of Werner Baumann, Bayer’s chief executive, to fly in from Germany during the Easter holidays to lead the negotiations.

“This whole transaction was kind of out of the ordinary, and so therefore it required a certain level of personal touch,” said one Department of Justice official.

Mr Baumann said the company had now obtained “almost all clearances which are conditions for closing the transaction” and that it expected to receive all remaining approvals for the deal “very shortly”.

“Receipt of the DoJ’s approval brings us close to our goal of creating a leading company in agriculture,” he said in a statement.

The German group added that it expected to complete the divestment of all business units that it promised to sell as part of the antitrust process in approximately two months.

The approval from the DoJ came as KWS, the German seed company, made a last-ditch effort to scupper the agreed sale of Bayer’s vegetable seed business to BASF.

Bayer formally committed to selling Nunhems, the vegetable seed business, as part of its effort to win regulatory approval for its takeover of Monsanto.

The unit was sold to BASF together with other seed businesses in April for €1.7 billion, but the transaction can only be completed once the European Commission formally declares BASF to be a “suitable buyer”. Bayer declined to comment on the offer.

BASF also declined to give a direct response to the KWS bid, but stressed that it had signed a “binding agreement to acquire the vegetable seeds business of Bayer”. – Copyright The Financial Times Limited 2018