AuriGen Medical rated first of 1,280 firms in Horizon 2020 funding round across Europe 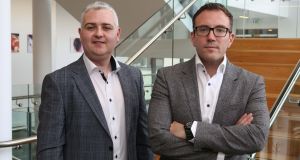 Persistent atrial fibrillation affects about 10 million patients across Europe alone and accounts for billions of euro in medical costs annually. The NUI Galway spinout company is developing the first heart implant that will allow doctors to treat both the stroke and heart failure risk associated with this condition.

It was ranked first out of 1,280 applications across all sectors for Horizon 2020 SME Instrument funding, securing financial support of €2.5 million under the programme.

More than 70 per cent of atrial fibrillation patients have persistent or long-standing disease. Current treatment options include medications, cardioversion and ablation, a keyhole procedure carried out to scar or destroy tissue in the heart that is allowing incorrect electrical signals to cause an abnormal heart rhythm. But these options address only the minority of patients with intermittent disease, the Galway company says.

AuriGen Medical believe that, once approved, its medical device could help the majority of patients become free from atrial fibrillation altogether.

AuriGen’s implant will sit in what is called the left atrial appendage, a small flap in the heart where blood clots can form in the event of an irregular heartbeat.

The AuriGen technology utilises sensors and software algorithms to give doctors real-time feedback on the quality of the procedure. By making it easier for doctors to tell if they have permanently electrically isolated the left atrial appendage, AuriGen believes it can increase success rates while shortening procedure times and open the procedure to even more physicians.

With the costs of repeat ablations estimated at more than $50,000 AuriGen says its device aims to deliver significant cost savings to healthcare providers.

In the longer term, the company says, there are more than three million medication-resistant atrial fibrillation patients within the United States and the EU who, between them, undergo 500,000 ablations each year.

AuriGen said its technology is based on significant clinical data underpinning the benefits of electrical isolation of the left atrial appendage in persistent atrial fibrillation.

Mr O’Halloran, who is AuriGen’s chief technology officer, says it will use the Horizon 2020 funding to further develop its product in preparation for first in human trials in 2020. That will include recruiting some key people to the company.

“Ranking first in the Horizon 2020 SME instrument is an incredible endorsement of AuriGen Medical’s technology, market opportunity and the company’s management team,” said Dr Thompson, who is AuriGen’s chief executive.