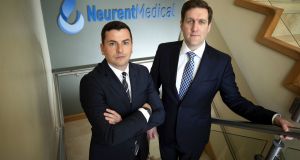 An Irish company developing a breakthrough therapy for a common nasal condition has raised €9.3 million.

Neurent Medical, based in Oranmore, Co Galway, is developing a medical device that would allow doctors treat patients with rhinitis in their offices, rather than in a surgical setting.

The funding round was led by Fountain Healthcare Partners, the Irish life sciences fund. Others involved in the significant fundraising include Atlantic Bridge Capital, the Western Development Commission, Enterprise Ireland and a syndicate of US and Irish medical device sector veterans.

Neurent chief executive Brian Shields expects the fundraising to see the company through to an application for commercial approval to the Food and Drug Administration. The company plans to recruit another 25 staff on the back of the investment.

He said the company had consciously kept a low profile until this first equity fundraising as it was adopting a very novel approach and there was always a “fear of fast followers”.

Mr Shields and his co-founder David Townley identified rhinitis as area of unmet medical need after shadowing earn, nose and throat surgeons for an extended period. Rhinitis is an inflammatory disease of the nose – leading to congestion and rhinorrhoea, or runny nose – which is reported to affect up to 40 per cent of the population, making it the fifth-most common chronic disease in the United States.

Mr Shields said Neurent was leveraging old, but high-risk, surgical practices dating back to the 1950s. “The outcome was brilliant back then, if you weren’t blinded by the procedure or dead,” he said.

His company is now developing a low-risk, single-use device that can be used by doctors in their offices under local anaesthetic, meaning an effective and lower-cost option for patients.

Neurent expects that it will deliver relief for up to three years with no requirement for follow-up medication. That, says Mr Shields, compares to a current regime where, even after surgery, patients are back on drugs and remain on them, adding both to cost and patient frustration, he says.

Neurent believes there is a potential $2 billion market opportunity tackling both the 350,000 or so non-allergic rhinitis cases that opt for surgery at the moment and almost twice that number of allergic rhinitis patients for whom no current surgical option exists.

“We have clinical evidence, showing we have a good response rate with this group,” said Mr Shields.

The company hopes to begin the first of two clinical trials next year, possibly in the US. It does not expect to have to tap investors for further funds until it is gearing up for commercialisation, hopefully in three years.

Securing venture capital funding at such an early stage is a major coup for the company, Mr Shields said, and would bring a level of sophistication to what it achieves with its funds.

Justin Lynch, a partner at Fountain Healthcare who is joining Neurent’s board following the fundraising, said that a substantial part of the rhinitis patient population were candidates for surgical treatment “but currently the surgical treatments are sub-optimal and provide only temporary relief”.

“We are investing in Neurent to help build a credible and sustainable business with great potential,” he said.