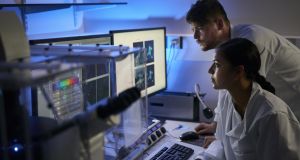 Genesis aims to double turnover every year for the next five. Photograph: Getty Images/Cultura RF

Genesis Automation, a Cork-based healthcare software company, has signed a deal which sees it entering the US market as it edges to build its turnover up to €10 million this year.

The company has agreed to supply its software to the Texas-based Driscoll Children’s Hospital in a deal that will be worth up to $1 million (€850,000) over the next five years. It comes as the company angles to strengthen its presence in the US market, ultimately growing sales there to about 70 per cent of its total sales over the next three years.

Genesis was created by Noel O’Hanlon, a finalist in the 2018 EY Entrepreneur of the Year programme, to manage inventory in hospitals, capture procedure information and analyse the cost of procedures.

The company is currently focused on the British market and has its software in 27 hospitals. Mr O’Hanlon said the move into the United States will help the company double turnover every year for the next five years given that hospital groups there tend to have about 15 locations in their portfolio.

Genesis raised €21 million earlier this year in an effort to grow the US market and now employs 14 people there in sales and support roles. The company’s base is still Cork, where it employs 30 people, despite not having sales in Ireland.

“I don’t think [the HSE] has a system for engaging with companies like us, quite frankly,” Mr O’Hanlon said. “Fundamentally, the system is wrong in Ireland.

“In the UK, every time a hospital system does a procedure, they get money for it. In Ireland you get a sum of money and the more procedures they do the less money they have,” he explained.

The Irish market doesn’t form part of the company’s expansion plans, with deal sizes in the US far greater. Mr O’Hanlon instanced a recent quotation for a US hospital deal of $2.7 million (€2.3 million) per year to demonstrate the opportunities in that market.

Mr O’Hanlon set up the group in 2009, having worked previously as IBM’s marketing director in western Australia and a managing director of IPT Cork, a supplier of equipment to the electronics industry.

Genesis is ultimately aiming to double turnover every year for the next five having initially developed its service with Plymouth NHS Hospital in Devon. The company is backed by private equity and Enterprise Ireland.