Fiscal warnings, Hendrick on the block and the best tech gifts for Christmas 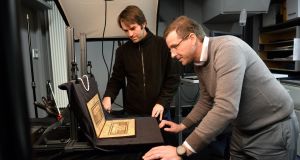 Party time is fast approaching but the Irish Fiscal Advisory Council is not in the mood. Eoin Burke Kennedy reports that it cites overspending on health as the prime reason for the Government not sticking to its budgetary plans and the council also warns that our corporate tax take is built on flimsy foundations.

Just over six months on from its official opening, writes Ronald Quinlan, Dublin’s first street art hotel, the Hendrick in Smithfield, is being offered for sale quietly by its developer owners at a guide price of between €45 million and €50 million.

Seán Quinn’s online betting operation, Quinnbet, made a profit last year of €157,705, having booked a loss of €90,495 the previous year, its first year in business. Colm Keena has the details.

Irish company LetsGetChecked is to add 120 new jobs to its Dublin and New York offices in the next year as it continues to expand its platform’s reach. Ciara O’Brien reports.

Waste collections charges could rise as a result of continued volatility in the sector, City Bin signalled, as the company reported it had improved revenues to almost €26 million last year, reports Peter Hamilton.

The Republic has the highest ratio of artificial intelligence (AI) talent in the European Union, according to a new study from LinkedIn. Charlie Taylor has the details.

Because, as mentioned above, the season is almost upon us Ciara O’Brien has a list (yes, it’s been checked twice) of all the best tech to suit every budget. Ciara also reviews GoogleStadia.

Dick Ahlstrom, in his column, wonders where human gene-editing will lead us and Karlin Lillington wonders why the State is not running its own genome project.

Tim Keefe tells Charlie Taylor how, and why, the Chester Beatty is digitising its collection.