KLM to begin daily flights between Cork and Amsterdam 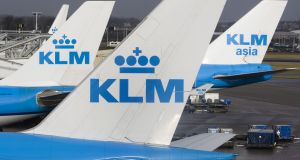 KLM Cityhopper will use Embraer 175 and 190 craft, which have about 100 seats, on the route between Cork and Amsterdam.

Dutch carrier KLM will fly daily from Cork to Amsterdam next summer, the airline confirmed on Wednesday.

Subsidiary KLM Cityhopper will fly daily over the summer between both cities beginning on March 30th, 2020.

Niall MacCarthy, managing director at Cork Airport, welcomed the news. “We expect tourism and the business community throughout the south of Ireland will see the benefits of this new service,” he said.

“KLM offers customers from the south of Ireland a convenient connection to Amsterdam Airport Schiphol, and onwards to over 170 KLM destinations,” he said.