Ditch your console and play Stadia on computer 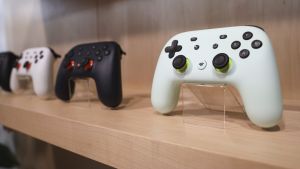 When Google announced it would launch a streaming gaming service this year, there was quite a bit of interest. Interest and questions. Could Google hasten the end of the console? Would the games publishers get on board? Would it even work?

Stadia ditches the console, giving you the option to play through a mobile device running the Stadia app on your computer. The basic service option is free; you pay for the games you want to play, and you can play them anywhere you want – on a TV, laptop, desktop PC and compatible smartphones or tablets. All you need is a wifi connection.

On the phone or tablet, you have the Stadia app; on a computer you go to Stadia.com on your Chrome browser, and use either the keyboard or a controller linked over USB.

If you pay for Pro, you get the highest-quality streaming – 4K, only good if you have a strong wifi connection and a compatible TV – and offers on games and add-ons. The Founders edition reviewed here, like the Premiere edition still on sale includes the controller, three months of Pro membership and the Chromecast Ultra you need to connect the controller to play on your TV.

And the games are the big name ones, with Destiny 2, Mortal Kombat and Red Dead Redemption just some of the big-name titles. The best bit, and the one that would tempt most people, is that as soon as you buy the game, you can play it. There are no patches or updates to worry about: your games are there, ready to go when you are.

It all sounds simple enough and very tempting. And so it would have been, had it not been for one tiny detail: wifi.

Like many things in life, wifi is both a source of great freedom and great restriction. In Stadia’s case, it was more restriction, because any sort of interference seemed to send the system into a tailspin.

My early impressions of Google Stadia were initial optimism, followed by crashing disappointment. The controller is easy to set up and works well. But in under half an hour I was bumped off because my wifi wasn’t up to scratch. That meant the pro benefit – the 4K gaming – wasn’t usable. On a recent trip away with Stadia in my bag, the hotel wifi wasn’t stable enough either, not even for the standard definition gaming.

Now the obvious solution is the simplest one: there is the option to use an ethernet connection, but that then means you have to a. have an ethernet connection available – fine if you are playing on a TV over chromecast, not so much if you are on a laptop, and b. be able to get close enough to your ethernet port to connect your device. The idea that you can game anywhere on any device suddenly becomes a lot more restricted.

I really wanted to love Stadia. There were times when I did, when everything just worked perfectly. Then Stadia seems like the obvious solution because it’s just so flexible and fits in with a new world where we work across multiple devices, and our entertainment has shifted from the big box in the corner to whatever screen we have with us. Why shouldn’t gaming be the same?

When things worked well, Stadia was a dream. Getting the controller connected was simple and quick. I didn’t get the lag that other users have complained about, and I could play on whatever device I felt like. It didn’t matter if it was my laptop or my smartphone and the Stadia controller.

I’m not writing off Stadia. It’s a start – a shaky one, from what I’ve seen – but the potential that is there is so massive, it will be interesting to see how it develops.

I hope Google sticks with it. The company has shuttered a few projects that were no longer working or fit its purposes, but if you are asking people to spend full price on digital games, they need to trust that they will still be around to play in a few years’ time.

The idea that you can carry your own games system around with just a chromecast, a controller and a smartphone is a great one. And when Stadia works well, it is a great experience.

Unless your internet connection is bulletproof, you won’t get the best out of Stadia. Any slowdown makes it impossible to play, so you are best to set this up where you can

Also, you are paying fairly high prices for the games, which people may not expect. You can only play them on Stadia, and you have no physical version, so if Google decides in a few years to shutter Stadia, your games will go with it.

You can stream in 4K, if you don’t mind hammering your home broadband. But it’s only worthwhile streaming in 4K if you have a TV that can take advantage of that.

Stadia feels like it could be great, but you are limited by your own equipment. Who knows where it may go in the future?