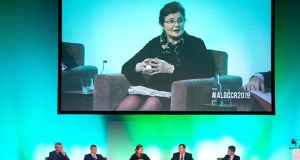 Garda fraud investigators have recovered more than €20 million from criminals who duped businesses over the past four years, a conference in Dublin heard on Wednesday.

“I am quite sure that we have recovered over €20 million in the last four years for victims of crime,” he told the gathering, adding that the cash had been returned to the businesses involved.

The detective calculated that the biggest single sum recovered in that time was €3.5 million. The Garda unit has tracked stolen cash from internal and external fraud to Hong Kong, the US and other countries.

Responding to questions from Kenan Furlong, corporate crime partner with A&L Goodbody, Chief Supt Lordan agreed that organisations should report fraud as soon as it is discovered. However, he pointed out that his bureau had recovered money weeks after it transferred out of the Republic and was feared untraceable.

Speaking after the summit in the Convention Centre, the senior garda said many organisations remained too trusting of emails and risked losing cash to criminals as a result.

When large invoices are due, the criminals mask their emails to look like those of the supplier and contact the business, asking that the cash be paid into a new bank account. Chief Supt Lordan said that often companies mailed the supplier back to confirm that they had changed their bank accounts, but they were simply contacting the criminals, who replied confirming the change.

As a consequence, the garda said businesses hand over large sums to criminals. He warned that companies should ring suppliers in this situation to check that they have changed banks, instead of simply taking emails at face value.

“Think about the biggest invoice amount your company will pay this year, then think about handing that over to criminals,” he said.

Pat Clavin of the Criminal Assets Bureau told the conference that drug dealers and other criminals increasingly used the motor trade to launder money.

“If something gets too big too quick, that’s one of the warning signs,” he said. He added that the bureau watched for such things as a sudden injection of cash, or more particularly, stock, such as 150 cars arriving from “it’s not clear where”.

The bureau chief noted that criminals were also increasingly using other businesses such as gyms, nail bars, barbers and hairdressers, as fronts to handle drug money.

Director of Corporate Enforcement Ian Drennan said that his office was now focused on larger cases, more likely to be referred to the Director of Public Prosecutions, than on minor offences. His office has hired extra staff, including accountants and a specialist in digital forensics. He told the conference companies cannot eliminate the risk they will be victims of wrongdoing.

“What you can do is put strong controls in place to mitigate the likelihood of those risks materialising,” he said.

Derville Rowland, the Central Bank’s director general, financial conduct, told the conference that her organisation was revisiting the Republic’s banks to ensure that they have done everything to which they committed in the wake of the tracker mortgage scandal.