Ireland to get first flights to Shanghai next year 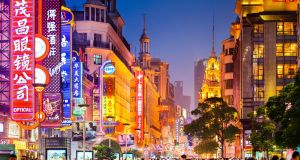 Juneyao confirmed on Wednesday that it will begin flying twice a week from Dublin to Shanghai beginning next March.

The Chinese airline will fly all year round from Dublin to Shanghai, with a short stop in Helsinki, on Sundays and Thursdays.

Shanghai is China’s biggest city and the world’s fifth biggest financial centre. Travellers already fly 42,000 times a year between there and this country, making it China’s biggest “unserved” destination for Irish people.

Dublin Airport managing director Vincent Harrison welcomed the news. “Shanghai is a major global economic hub and this new route will significantly boost Irish tourism and trade, making it easier for Irish firms to do business in China and enhancing the options for Chinese tourists visiting Ireland, ” he said.

Wang Junjin, Juneyao Air chairman, said he was “delighted” that Dublin was being added to the carrier’s European destinations.

“We see strong demand for travel between Ireland and Shanghai and we are sure that this new service will grow the market by significantly improving the connectivity between Shanghai and Dublin,” he added.

He pointed out that the airline offered connections at Shanghai’s Pudong Airport to cities such as Suzhou, Nanjing and Hangzhou in eastern China.

Tourism Ireland estimates that 100,000 Chinese tourists holidayed here in 2018, 11 per cent more than the previous year.