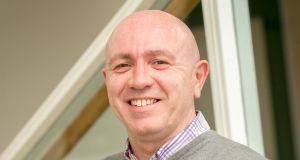 Declan Trumble was working for a car insurance telematics startup when the inspiration for KudosHealth struck him. ‘Our solution gives employees the autonomy to participate how, where and when they want by doing whatever activity they want to improve their own health.’

Over the last decade employee wellness programmes have gone from “nice to have” to “must have” for organisations keen to attract and retain talent. But as these programmes have grown in scale, so too have the challenge of juggling multiple activities from multiple service providers while also sustaining people’s interest. Sligo-based startup KudosHealth reckons it has the answer to both problems: A B2B SaaS platform that allows companies to manage all aspects of their wellness agenda in one place while offering employees perks to take part.

Wellness programmes often fall at the first hurdle of participation and recognising that people usually want to know what’s in it for them, KudosHealth has developed a currency called Kudos Coins which employees earn for participation and redeem against gifts and other perks. A gift could be something external from a well-known consumer brand while a perk could be time off for coins earned. Rewards can be tailored to suit an organisation’s demographic.

To make it as easy for employees to get involved, Kudos has a third card up its sleeve. Rather than asking people to sign up for something new, it taps into the fact that many people are already wearing fitness trackers and using health apps and it lets them use their existing devices, such as Fitbits and Apple watches, to rack up points.

Company founder Declan Trumble was working for a car insurance telematics startup when the inspiration for what has become KudosHealth struck him. “We were changing the driving behaviour of young drivers by offering them regular incentives and the chance to get cheaper car insurance and I began to think about how a similar mechanism, using an open API (a publicly available application programming interface) to pull data from people’s devices could be used to encourage healthy living behaviours. I could see people were already digitally engaged with their fitness and health and decided that was the way in,” he says.

“KudosHealth enables employers to tap into this existing culture of self-tracking and to create their corporate wellness programme around it by simply incentivising employees to track their own health,” he adds. “The biggest challenge with promoting any health initiatives at work is getting people involved. Very often the events laid on are not to everyone’s taste – they are time and location specific and they don’t suit people, especially if they’re happening outside of office hours. In addition, these events can be ad hoc with a short-term focus, no follow-up and no measurement of success other than how many participated and the numbers are often very low. Our solution gives employees the autonomy to participate how, where and when they want by doing whatever activity they want to improve their own health.”

Trumble says Kudos is solving a problem for three key stakeholders: Employers who want engaged employees and low absenteeism rates, health insurers who want fewer claims and health providers who want people to stay well to reduce the burden on the health service. “We provide a single channel through which they can all reach people with their message and in return individuals can demonstrate what they’re doing to take care of their health and benefit from any monetary and other rewards that might bring.”

KudosHealth employs six people and this will rise to about nine next year. Investment in the business to date is approximately €200,000 which has come from founder funds and the BioExel medtech accelerator at NUIG Galway with support from Sligo LEO, Enterprise Ireland and the InsurTech accelerator in the US, which has also given KudosHealth an introduction to health insurers there. The company is now looking to raise €250,000 (which will be matched by Enterprise Ireland) to build out its commercial activities and while it has already been paid by some of its pilot customers, real revenue generation will begin in 2020.