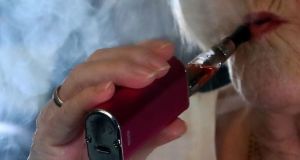 US health officials have reported more than 2,000 cases of vaping-related lung illness and 47 deaths linked to its use in the country. Photograph: Peter Byrne/PA Wire

The world’s second largest tobacco maker, British American Tobacco (BAT), said on Wednesday a slowdown in the US vaping market would lead to lower revenue growth in its vaping arm even as it gained market share in its traditional cigarettes business.

US health officials have reported more than 2,000 cases of vaping-related lung illness and 47 deaths linked to its use in the country, leading to tighter regulatory scrutiny and individual state bans.

This has led to a drop in demand for the devices, pushing BAT to forecast revenue growth in its new categories business – e-cigarettes, tobacco heating and oral products – to be at the low end of its 30-50 per cent target. It had previously anticipated revenue growth in the middle of that range.

US vaping products make up 17 per cent of BAT’s new categories and generate 0.8 per cent of total group revenue, according to Jefferies.

It controls only a sliver of the market, in contrast to rival Altria-backed Juul, which has three-quarters of market share.

1 Bank leaked my loan request to family who tried to rip me off
2 Ryanair and Aer Lingus monitor impact of coronavirus on travel to Italy
3 EU and British positions harden ahead of Brexit talks
4 Over $12m from sale of Walford handed over in Sean Dunne bankruptcy case
5 UK lays down red line for Brexit trade talks
6 Boris Johnson's new immigration regime will damage much more than industry
7 Digicel’s earnings rise as it looks towards refinancing $1.3bn of bonds
8 Bank of Ireland plots mortgage book sale and deeper cost cuts as profits fall
9 Mastercard to create 1,200 new jobs by expanding base in Dublin
10 Ownership row over properties threatens €5.1m sale, court hears
Real news has value SUBSCRIBE