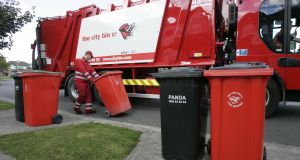 Waste collection charges could rise as a result of continued volatility in the sector, City Bin signalled, as the company reported it had improved revenues to almost €26 million last year.

The Galway-based operator, which also services Dublin, posted a rise in sales of 24 per cent during 2018. But directors noted that disposal costs rose 39 per cent due to a “significant increase in volumes and recycling prices”.

That rise led to a reduction in pretax profit from €2.4 million to €2.2 million.

“The waste sector continues to face increased pressure on costs, most notably disposal, staff and insurance costs,” directors said in a note attached to the recently filed accounts. “Volatility in international disposal markets and increased regulation are features that will remain for the near future and the directors believe that these factors may ultimately lead to further price increases for consumers.”

And while the directors said they delivered a net profit margin during the year on account of rising demand in the waste sector, they said they did not expect this growth in demand to continue as “economic and political uncertainty, most notable Brexit and US-China trade negotiations, impact investment and consumption”.

Carlyle Cardinal Ireland, a private equity fund established by Nasdaq-listed Carlyle Group, and Dublin private equity group Cardinal Capital, agreed to make an investment in City Bin earlier this year. The terms of the investment were not disclosed at the time of the deal.

City Bin was co-founded by Gene Browne in 1997 and now serves more than 80,000 residential and commercial customers.

Directors warned of several uncertainties facing the household waste collection industry. In particular they noted that the establishment of an economic regulator for household waste collection, as suggested by the Competition and Consumer Protection Commission following a review of the industry, has not happened. “At the date of this report, no actions on these findings have been taken by the Government, and the directors believe that structural clarity on the industry will not be forthcoming soon.”

The company employed 157 staff during the year, up from 134 the previous year, and had staff costs of €5.4 million. It also had cash at the bank and in hand of €2.1 million.