Netflix production Vikings: Valhalla to be shot at Wicklow studio 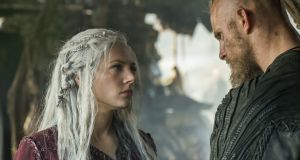 Last year was the final year of filming for Vikings at Ashford Studios, led by Joe O’Connell and Shelley O’Connell. The studio last week got a major boost with news that a Vikings spin-off, Netflix production Vikings: Valhalla, will be shot there. Earlier this year, the studio got planning permission for a €90 million extension.

A spokesman for Ashford Studios said the company was “delighted” at the Vikings: Valhalla news, noting that no filming at taken place there since Vikings wrapped up late last year.

“It takes a long time in this business for productions to be green lit,” the spokesman said, adding that the business is carrying out preparatory work for its planned extension.

“We’re also making sure that it stacks up financially but we are on track with it,” he said.

Last year’s profit figure compared to €2.4 million in 2017. At the end of last year, shareholders’ funds at Ashford Studios totalled €6.07 million – an increase of €1.86 million over the 12-month period.

Ashford Studios paid €16.58 million to staff and crew for the sixth series of Vikings in the year to April 2018.