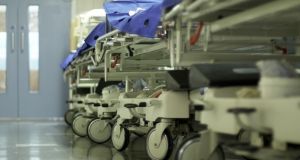 ‘The most persistent driver of these overspends was hospital spending.’ File photo.

The persistent pattern of overspending in the State’s health budget is being driven by hospitals, according to the Irish Fiscal Advisory Council (Ifac).

In its latest assessment, the State’s budgetary watchdog again criticised the Government for failing to stick to its spending plans and for using the current windfall in corporation tax to paper over the cracks.

It warned that Government spending this year was likely to overshoot by about €700 million, in part because of overruns in health. Health overspending in recent years has been “substantial”, averaging around €500 million a year between 2014 and 2018, the council said.

The most persistent driver of these overspends was hospital spending, 70 per cent of which related to staff costs, it said.

The council noted that hospital spending increases had effectively been achieved through overruns rather than planned spending.

“Is it a case of a failure to stick to budgets or is it budgets that lack credibility in the first place?” Ifac chairman Seamus Coffey said. “It looks like it could potentially be a combination of the two,” he said.

Nonetheless the council said that persistent overruns in health had been the result of weak planning and weak spending controls and that this had led to a “soft budget constraint” problem across the health service.

“That is, the budget allocations are not seen as credible by the health managers, which can lead to unplanned increases in spending,” it said.

The council has been repeatedly critical of the Government’s failure to stick to its budgetary plans. It said Budget 2020 involved a spending hike of 4.4 per cent, which was significantly ahead of the 3.1 per cent signalled earlier in the year. However, this was still a sustainable level of expansion, it said.

The council warned that recent upward spending revisions had been in current spending, including in health, “and hence will be longlasting in nature” and harder to reverse in a downturn.

In its report, the fiscal monitor also raised concern about the Government’s increased reliance on corporation tax receipts, which hit a record €10.4 billion last year, accounting for one-in-five euros of tax collected.

It estimated that between €2 billion and €6 billion of the current windfall may be temporary in nature leaving the public finances extremely exposed to potential reversals.

Mr Coffey also warned that with 80 per cent of receipts coming from foreign multinationals, spending the additional revenue had the potential to overheat the economy, particularly during this phase of accelerated growth.

The council said the Government needed to improve transparency around spending in non-exchequer areas, which are expected to drive budgetary overruns this year. Much of the additional non-exchequer spending this year appears to relate to local authority and approved housing agency funding for social housing.

Ifac was also critical of the Government’s so-called rainy-day fund plans, which it said had been watered down since their inception in 2016. Originally the Government pledged to set aside €1 billion every year starting in 2019, but this was later revised down to €500 million and then deferred altogether because of Brexit.