Who were the convicted bankers? 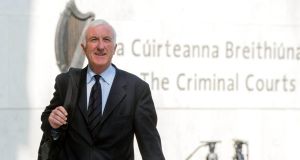 After former Irish Life and Permanent chief executive Denis Casey lost his appeal against his conviction in the Supreme Court on Thursday, we profile the Republic’s convicted bankers.

Dubliner Denis Casey qualified as a certified accountant and began his career with Allied Irish Banks. He joined Irish Life in 1980, working his way up the ranks. He was appointed to the board in 2000.

In May 2007, Casey succeeded David Went as group chief executive of Irish Life & Permanent, which was then a large listed company and one of the biggest financial players in Ireland.

Casey resigned from the board of IL&P on February 28th 2009 following the revelation of the company’s controversial €7.2 billion circular transaction designed to bolster Anglo Irish Bank’s balance sheet. His employment with the company ceased on May 14th that year.

The company’s annual report for the year shows that he received total remuneration of €4.57 million in 2009, up from €942,000 in the previous 12 months. This included a payment of €1.25 million in lieu of service in accordance with his “contractual entitlements” and €2.93 million relating to his pension.

After leaving IL&P, Casey qualified as a barrister and is listed in the law library as a junior counsel with the following specialisations: banking, finance and securities, bankruptcy/insolvency/reorganisations, company law, insurance law, pensions law and tax law.

Casey, who is 56 and lives in Raheny, Dublin, was also a former chairman of Financial Services Ireland, and a past president of the Insurance Institute of Ireland.

On Thursday, He lost his appeal over his conviction for his role in the multi-billion euro conspiracy to deceive people about the true financial state of Anglo Irish Bank in 2008.

McAteer was the last of the four to be charged in connection with this case. He grew up in Co Donegal and qualified as a chartered accountant in 1975. He was a partner with accounting firm PwC before becoming managing director of Paul Coulson’s Yeoman International Leasing, a venture capital firm.

McAteer was later offered a job by Seán FitzPatrick, then chief executive of up-and-coming Anglo Irish Bank. He led a four-strong team when he started in 1992 when its profits were under €13 million.

As finance director, McAteer was there for a 15-year stretch of continuous growth and expansion as Anglo became Ireland’s third-biggest bank, with operations in North America, the UK and eastern Europe.

As group finance director and chief risk officer, McAteer was one of the most senior executives at Anglo at the time of the crash in late 2008. In 2014,McAteer was one of two former Anglo executives convicted of making loans to illegally prop up the bank’s share price. He was ordered to complete community service, in lieu of prison.

In the middle of last year, McAteer was granted free legal aid for two criminal trials connected with his time at Anglo. During the hearing to decide this matter, McAteer’s counsel revealed that his client had an annuity on his €1.5 million pension of €90,000 per year, but that his wife is entitled to half of the overall amount.

McAteer is 68 and lives in Greenrath, Tipperary.

A low-profile executive of Anglo Irish Bank before the financial crash, John Bowe came to prominence in 2013 through the release of the so-called Anglo Tapes.

These detailed a number of colourful conversations between senior executives before the bank’s collapse in 2008 and subsequent nationalisation.

The jury heard a number of phone calls which involved Mr Bowe and his then chief executive David Drumm. On September 30th, Seán FitzPatrick, then chairman of Anglo, telephoned Bowe to congratulate him on his efforts on a day when the bank had experienced record inflows of cash in the wake of the guarantee.

Bowe was later elevated to director of corporate development and was involved in Anglo’s efforts to collect debts owed by the family of Seán Quinn, once Ireland’s richest man.

Since leaving the bank in March 2012, Bowe is reported to have founded his own consultancy firm, working with accountancy practices on client engagements in the leisure and healthcare sectors.

Bowe was one of the Anglo executives to transition to the Irish Bank Resolution Corporation, which was formed by the State through the merger of parts of Anglo and parts of the former Irish Nationwide building society.

Bowe is 55 and lives with his family in Glasnevin, Dublin.

A native of the north Dublin seaside town of Skerries, former Anglo Irish Bank chief executive David Drumm was one of eight children of a truck driver. After leaving the local Christian Brothers school, he qualified as a chartered accountant, specialising in liquidations, with Deloitte & Touche.

Drumm went on, four years later, in 1988, to join Dundalk-based Enterprise Equity, the venture capital arm of the International Fund for Ireland, before returning briefly to the world of accountancy and, then, in 1993, being offered an assistant manager role in the then fledgling Anglo Irish Bank (after failing to secure a manager position).

The pay, at £23,000 a year, was 40 per cent below what Drumm had been on in his previous job. But the move paid off and within two years, he had been promoted to manager.

By 1997, Drumm was in charge of a team of lenders and was asked by then chief executive, Seán FitzPatrick, to go to the US to find opportunities for the bank. Departing for Boston with his wife, Lorraine, and two daughters, Drumm spent the next five years elbowing in on property deals in the Boston area.

However, the naming of the then 37-year-old in September 2004 as the bank’s next chief executive came as a surprise. One of four internal candidates interviewed to succeed FitzPatrick, who’d been in charge for 22 years, Drumm was the only one not a director. The favourite, Tiarnan O’Mahoney, quit within months.

Anglo Irish’s loan book trebled to €73 billion during the four years Drumm was in charge, as it bankrolled some of the State’s largest property developers. However, its stock market value soon began to fall after reaching a €13 billion peak in May 2007, before going into freefall on St Patrick’s Day 2008 as investors fretted about its exposure to the slowing property market.

When the government of the day stepped in with a snap guarantee of the banking system in September 2008, weeks after the implosion of US investment bank Lehman Brothers, Anglo Irish was the weakest link, on the brink of collapse.

Drumm stepped down six days before Christmas in 2008, hours after FitzPatrick, then group chairman, resigned after disclosing to the stock market that had been in the habit of moving his tens of millions of euro of bank loans to Irish Nationwide Building Society at the group’s year end, keeping them from view of investors and auditors.

Within weeks, Anglo Irish was nationalised and the Garda fraud unit and investigators from the corporate watchdog had raided the bank’s St Stephen’s Green offices after news emerged of IL&P’s temporary deposits, and the group’s €450 million of loans to 10 investors to buy a stake in the bank as the family of businessman Seán Quinn was forced to unwind a leverage 28 per cent position.

Drumm left Ireland for the US in June 2009 and filed for bankruptcy in Boston the following year after failing to reach a settlement with his former employer on loans provided mostly to buy Anglo Irish shares.

Financial statements at the time showed his stated debts amounted to $14.3 million, while he valued his assets of $13.9 million, including a €5 million pension pot, $3.6 million in unpaid salary and other money he claimed the bank owed him.

However, in denying Drumm the chance to a fresh start in 2015, US bankruptcy judge Frank Bailey said the former banker knowingly and fraudulently misled creditors by failing to disclose hundreds of thousands of cash and property transfers to his wife, starting in 2008 as the bank was facing collapse. The judge concluded at the time that Drumm was “not remotely credible”.