The State company wants to enter the Irish mortgage market, and hopes to secure a partner within three months 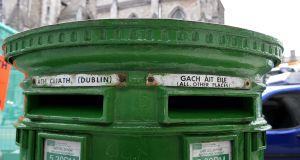 The State postal service put out an alert in December seeking expressions of interest from lenders. Photograph: Eric Luke

Not put off by its abortive entry more than a decade ago into financial services with Benelux lender Fortis, An Post seems to be confident that it will find a partner to enter the mortgages market within the next 2½ months.

The State postal service put out an alert in December seeking expressions of interest from lenders. A spokesman for An Post said it received a “wide range of interest from both domestic and overseas providers” to its request for information ahead of an extended deadline of February 8th.

“This outcome, which will be to choose a partner, is expected to be concluded by the end of April 2019,” he said on Monday.

However, sources across the main retail lenders have indicted little or no interest in joining forces – especially as An Post has outlined a bold ambition of offering mortgages that would undercut the market in the Republic by as much as 1 percentage point.

It’s anyone’s guess at this stage what foreign firms have put their names into the mix. But they would have to be brave sorts given the political climate and the high levels of expensive capital that Irish banks must hold against mortgages as a legacy of the crisis.

Figures published in December by the European Banking Authority show that Irish banks had to hold almost two times as much capital against home loans as their European peers on average, and claims that the figure will rise to about 2.4 by the time the European Central Bank finishes its current review of the riskiness of banks’ assets.

Meanwhile, Sinn Féin has proposed a No Consent, No Sale Bill 2019 that would stop banks selling non-performing loans without the consent of borrowers.

While the Bill – similar to a Fianna Fáil one from mid-2016 seeking to give the Central Bank powers to cap mortgage rates – is unlikely to make it through the Oireachtas, the political noise is surely off-putting for any genuine would-be new entrants.

An Post’s venture with Fortis didn’t last three years. Consumers should hope that any new venture that emerges from the current search would be more lasting – and not fall victim to unsustainable gimmicks.