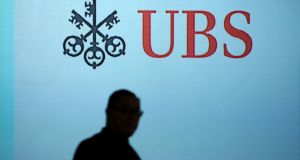 UBS has been hit with a record €3.7billion fine and ordered to pay €800 million in damages in France after a judge found the Swiss bank guilty of helping rich clients to evade paying tax.

After a six-week trial, the French court found UBS had illegally laundered proceeds of tax evasion and broken laws on soliciting French customers, the bank said in a statement on Wednesday.

If upheld, the fine would be the largest for any tax case in French history and wipe out a year’s-worth of profit for UBS. The lender’s shares fell as much as 4.7 per cent after the decision.

UBS said it “strongly disagrees with the verdict” and will appeal against the decision, which it characterised as “based on the unfounded allegations of former employees” rather than “any concrete evidence”.

The total proposed penalty is less than the €5.3 billion the French state originally demanded, with the judge taking €800 million off the damage payment prosecutors initially asked for.

The trial, which is the culmination of a seven-year French investigation, saw the bank accused of using “James Bond”-like tactics to illegally solicit clients and help them launder money.

UBS has argued that while its bankers did come to France and attend social events, prosecutors lacked evidence of the solicitation, which whistleblowers alleged took place at operas, during hunting trips and at the French Open tennis tournament.

The bank does not currently plan to make any additional litigation provisions and executives do not regret the decision to take the case to trial, according to two people briefed on management’s thinking. At present, the bank has only $640 million set aside for legal cases in its wealth management unit.

The decision is a blow to the Zurich-based bank, which is also gearing up for a court battle with the US Department of Justice over its pre-crisis sale of toxic mortgage securities. Executives rejected an offer of more than $2 billion to settle the US case late last year, believing they would end up paying less after a trial.

The uncertainty around both legal issues has weighed on UBS shares at a time when net new money flowing into the bank’s signature wealth management division has slowed, blemishing chief executive Sergio Ermotti’s otherwise largely successful pivot of the company away from investment banking. The bank’s shares have now fallen 30 per cent during the past 12 months.

The fine is “far higher than expected,” said Andrew Coombs, an analyst at Citigroup, who estimated it could eventually wipe 170 basis points off the bank’s key common equity tier one capital ratio, and push it below its 13 per cent target. “This year’s [$1bn] share buyback may have to be postponed until 2020, even if UBS does plan to appeal.”

An appeal in the French legal system would be a lengthy process, taking three years or more. First, the case would go to the court of appeals – where it would be retried in its entirety – then on to another higher court, according to lawyers familiar with the case.

The French penalty follows similar tax judgments in the US, where UBS was ordered to pay $78 million in 2009, and in Germany, where it submitted to a €300 million fine in 2014.

UBS has denied all wrongdoing in the French case, saying in November that the prosecutors had not provided any basis for “the irrational calculation” of the multibillion-euro fines being demanded. – Copyright The Financial Times Limited 2019