Top investors call on Deutsche to cut back US investment bank 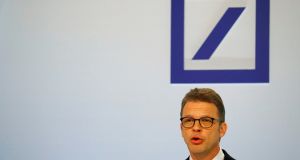 Christian Sewing, chief executive of Deutsche Bank. The pressure on Mr Sewing has risen as Deutsche Bank’s share price has fallen by a third in the 10 months since he took over. Photograph: Kai Pfaffenbach/Reuters

Several of Deutsche Bank’s biggest shareholders are calling for its chief executive to make deeper cuts to its perennially lossmaking US investment bank as they run out of patience with the lender’s poor performance and tumbling share price.

Four of the 10 biggest shareholders in Germany’s largest bank have told the Financial Times they want Christian Sewing to take more decisive action in turning round the faltering division, particularly in the US.

The pressure on Mr Sewing has risen as Deutsche Bank’s share price has fallen by a third in the 10 months since he took over. One of the investors said they told the bank recently that they wanted it to shrink the US investment bank by this summer.

There are also doubts over the position of Garth Ritchie, head of Deutsche Bank’s investment bank. “Christian needs to make a change in the next few months,” one big investor said, referring to a potential management shake-up.

Revenue has dropped by a third at Deutsche’s investment bank over the past three years, with analysts expecting another decline this year. According to a person briefed on the matter, its US investment bank has been lossmaking in nine of the past 10 years. Last year, it was put on a federal list of problem banks.

Cerberus, which has a 3 per cent stake in Deutsche Bank, has deployed former JPMorgan executive Matt Zames to probe how the German lender’s balance sheet and capital could be better used.

Mr Sewing appears to be resisting further cuts and recently said he wants to maintain the investment bank on a “broad footing”.

A Deutsche Bank spokesman said on Wednesday: “We have adjusted our footprint in our corporate and investment bank and in the US already in 2018, including reducing our leverage exposure by more than €100 billion.” The spokesman added that the lender had “completed our adjustments ahead of schedule” and there was now a good foundation for growth.