Bank takes £150m Brexit provision and pays a dividend of 6.5 pence per share 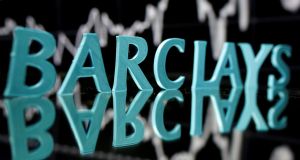 The bank reported its core capital ratio fell to 13.2 per cent from 13.3 per cent a year ago

Barclays reported a lower-than-forecast attributable profit of £3.5 billion for 2018, as it took a £150 million provision against Brexit losses and its trading business weathered a difficult fourth quarter.

Barclays did report signs of progress in its under-pressure investment bank, where profit for the full year increased 15 per cent to £2.6 billion as its equities trading unit saw income rise 25 per cent.

Barclays chief executive Jes Staley is locked in a high-profile tussle over the bank’s strategy with activist investor Edward Bramson, who believes the lender should ditch a costly plan to grow its investment bank and focus on other less risky parts of its business.

Mr Bramson on February 5th sought to ratchet pressure on the bank by tabling a resolution that would see him win a board seat, a bid which investors said was unlikely to succeed but which has sharpened focus on the performance of the investment bank.

The British lender set also aside £150 million to cover possible losses related to Britain’s exit from the European Union at the end of March, following peers HSBC and Royal Bank of Scotland which in the last week announced similar provisions.

Barclays paid a dividend of 6.5 pence per share and signalled intentions to return more capital via dividend increases and buybacks when it was practical to do so.

The bank however reported its core capital ratio fell to 13.2 per cent from 13.3 per cent a year ago, a dip which is likely to renew a debate over its ability to return more capital to shareholders at a time when rivals Lloyds Banking Group and RBS are ramping up payouts.

The bank’s profit of £1.4 billion when conduct and litigation charges were included compared to a £1.9 billion loss in 2017.

Barclays’ International division, which houses its investment bank, reported a profit before tax of £3.9 billion, in line with analysts’ expectations of £3.95 billion. – Reuters