Most Bank of Ireland staff in line for average 3.1% pay increase 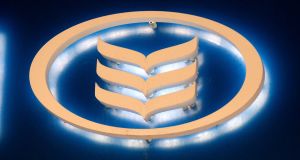 The bank has agreed to increase the minimum starter salary in the Republic from €23,500 to €25,000, according to sources. Photograph: Cyril Byrne/The Irish Times

Some 90 per cent of Bank of Ireland’s 10,500-strong workforce are set to benefit from an average 3.1 per cent pay increase agreed with the lender’s main trade union with the assistance of independent mediator Martin King.

However, staff in middle-management grades – which were subject to a cull of about 200 jobs last year – have been told that they will only receive raises “on a discretionary basis” from a “separate budget allocation”, according to a company spokesman.

Bank workers in the Republic of Ireland are set for an increase of as much as 3.7 per cent, backdated to January 1st and partly based on performance. Employees in Northern Ireland and Britain will benefit from a maximum 4.2 per cent hike to reflect the fact that inflation in the UK is running at a higher rate amid uncertainty over Brexit.

The bank has agreed to increase the minimum starter salary in the Republic from €23,500 to €25,000, according to sources. While employees had previously been entitled to between a 5 per cent and 7 per cent salary increase on promotion, they will benefit in future from at least a 7 per cent raise.

“We are recommending that our members accept these proposals, which we feel are the best that can be achieved by negotiation,” said Maeve Brehony, senior industrial relations officer with the Financial Services Union (FSU), adding that the ballot, which opened this week, will close on March 6th.

Meanwhile, staff at AIB agreed by what the FSU termed as a “slim majority” to accept an average pay increase of 3 per cent from April, in a deal that was finalised last month following negotiations brokered by the Workplace Relations Commission (WRC).

However, senior FSU official Billy Barrett said that that union has “a number of concerns” about how individuals are being affected as AIB disbands its complex web of staff grades for a new streamlined, seven-level grading system.

Mr Barrett expects a number of people to appeal how they have been “mapped into” the new grading regime, which takes effect from July. Employees of the bank have until the end of February to lodge an appeal, which would be subject to review initially by their line managers and, if necessary thereafter, by a third party within the bank.

It is understood that about 800 of AIB’s 10,000 employees are currently on salaries that are above the range for the grades into which they are moving. These have been “red-circled”, meaning they will not benefit from normal pay increases.

However, they will receive a cash lump sum equivalent “for all future years commencing on April 1st, 2020”, according to the WRC proposal, which was agreed to by the bank.