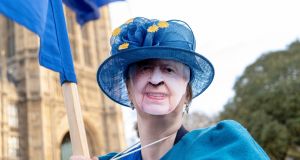 A pro EU demonstrator outside the British House of Parliament yesterday. Keeping alive the prospect of a chaotic Brexit has been a key strategy of Theresa May’s. Photograph: Niklas Hallen/EPA

Anyone who’s got a dose of the Brexit jitters should take a chill pill. Well, that’s according to the chief executive of one of the world’s largest banks.

Sitting down for what conference organisers like to call a “fireside chat” interview near the end of the all-day annual European Finance Forum in Dublin on Wednesday, Citigroup chief executive Michael Corbat surprised many delegates at the event when he said that he wasn’t at all surprised that the UK and the EU would be within 45 days of Brexit and still no deal having been signed off on.

“Tell me the last time you were in a big negotiation and you said, ‘It’s 45 days [to the deadline] – we’ll settle it today’? Human nature and the art of negotiation and game theory likely pushes it to the end,” he said.

“I don’t know you, but you probably waited until the last minute to do your homework,” he said to a room of bankers, many of whom were of a generation in Ireland when the final credits of Glenroe on a Sunday evening were the cue to whip out the books.

British prime minister Theresa May seems to be a devotee of those game-theory books. Keeping alive the prospect of a chaotic Brexit has been a key strategy of May’s, as she seeks to heap pressure on Brussels, and Dublin, to agree to some sort of compromise on the backstop, after her original withdrawal agreement was overwhelmingly rejected by members of parliament last month.

A spokesman for May insisted on Wednesday that the question of a no-deal remains firmly on the table, hours after it emerged that an ITV journalist had overheard her chief EU negotiator in a Brussels bar earlier this week saying if a revised withdrawal agreement was shot down by MPs, she would delay Brexit for a “long” period.

The problem, though, is that May is facing the prospect of a no-deal Brexit being taken off the table on February 27th, with former Labour minister Yvette Cooper and Conservative grandee Oliver Letwin planning to put an amendment to that effect before Westminster that day.

A similar move by Cooper was rejected by her parliamentary colleagues last month, but British government insiders are said to have privately conceded that it would pass this time.