Cantillon: Royal Bank of Scotland to be known henceforth as NatWest plc 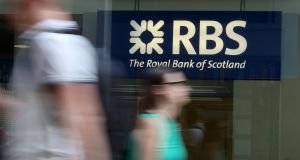 Royal Bank of Scotland: The past decade has been a nightmare. Photograph: Daniel Leal-Olivas

What’s in a name? Quite a lot, if Ulster Bank parent Royal Bank of Scotland is anything to go by. The Scotland-headquartered banking group is casting aside 300 years of history with a decision to stop using the RBS name at group level. It will henceforth be called NatWest plc.

On one level, it’s hardly a surprise. The past decade has been a nightmare for RBS. Overexposed in the financial crash of 2008, it was saved only with the help of a £46 billion bailout by the British government which, to this day, owns 62.4 per cent of the business.

It also developed an uncanny knack of finding itself in the headlines over a number of issues that did little to engender trust in the brand – the Libor scandal, allegations of mistreating small businesses compared to larger clients and the payment protection fiasco (Britain’s largest consumer finance scandal) – which has cost it more than £6 billion.

And that’s before you even consider the embarrassing collapse of an outdated and underinvested IT system that locked Ulster Bank customers out of their accounts for a number of weeks. It’s worth remembering it had to bail out Ulster Bank to the tune of £15 billion post crash.

Interestingly, Davies added that NatWest had not been so tarnished. Davies would remember better than most as a director general of the Confederation of British Industry as well as deputy governor of the Bank of England back in the 1990s, how RBS snapped up the far larger NatWest in 1999.

Back then, Scottish financial institutions had a stellar reputation for probity, sound management and strong performance, playing to stereotypes of thrift and practicality.

NatWest was one of the Big Four UK banking groups alongside HSBC, Lloyds and Barclays. It was also parent to Ulster Bank and to Coutts, which numbered the British queen among its customers. Once the most profitable of all British lenders, it had been hobbled by its own crash – the 1987 stock market crash – and subsequent scandals and poor management decisions.